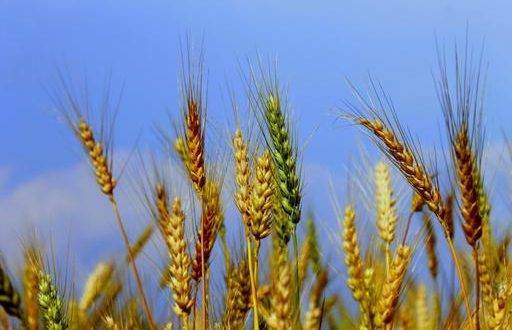 in Production Technology of Crops August 22, 2016

Wheat in Pakistan grown under different agro-ecological zones. In irrigated areas, wheat is planted after cotton, rice and sugarcane. In rainfed areas wheat is grown in sequence with maize, sorghum, pearl millet and after fallow especially in low rainfall zone.

In the Punjab region of India and Pakistan, as well as North China, irrigation has been a major contributor to increased grain output. Use of fertilizer and semi-dwarf varieties in developing countries has increased yields per hectare. Fertilizer and breeding technique improve its yield. Rotation cropping boost yield by 25%, rotation with canola crop

Globally wheat is a leading source of vegetable protein in human food, having a higher protein content than other major cereals, maize (corn) or rice.Wheat grain is staple food used to make flour for leavened, flat and streamed bread, biscuit, cookies, cake, breakfast, cereals, pasta, noodles, couscous and for fermentation make beer and alcoholic beverage or biofuel ( 7,8,9,10). Wheat is used in a secondary capacity in some markets as a feed or livestock. It is also used in thatching material for huts and sod barns.

The first identifiable bread wheat ( Triticum aestivum ) identified using DNA analysis in sample form a granary dating to approximately 1350 BCE at Assiros in Greek Macedonia (11). The whole grain can be milled to leave just the endosperm for white flour, the by-product of this is bran and germ. The whole grain is a concentrated source of protein which is 12.1% of whole wheat flour, fibre is 01.9%, Iron is 11.5mg/100g, Phosphorus is 355mg/100g, calcium is 48mg/100g and its caloric value is 341, while the refined grain is mostly starch. (12).In rapidly a developing country of Asia, westernization of diets associated with increasing prosperity is leading to growth in per capita demand for wheat at the expense of the other food staples.

With the country anticipating record production of 25.4 million tonnes of wheat this year, the UN’s Food and Agriculture Organization (FAO) has express satisfactions over rising cereal production in Pakistan in 2014. This increase is due to expansion in area under cultivation, favourable weather conditions during Rabi season in the main wheat producing provinces of Punjab and Sindh and ample supply of fertilizers and water (13). The FAO expects the total cereal production to four percent this year as compared to last year. The total production of cereal crops ( wheat, rice, maize and others) is estimated to be 40.63m tonnes as compared to 39.17m tonnes in 2013 (13).

Total 76% of wheat produced in Punjab, while Sindh produces 16%, KP-5% and Baluchistan produce 3% of total wheat produced across the country. The average what production per acre in Sindh is close to 26Mnn, while in Punjab it is around 23 Mnn per acre. In Sindh only 14 million acre land is under wheat cultivation and only 1.8 million acres having two crops per year. There is approximately 3.2 million acres land in Sindh, which can be bought under cultivation through improvement and planning. In Sindh, we have low crop yield is related to poor management. This includes later planting of wheat due to later maturity and harvest of previous crops like cotton, rice and sugarcane, low soil fertility due to continuous exhaustive cropping system and lack of legumes in the rotation and weed infestation. Crop yields also reduced due to low and imbalance use of fertilizer.

It consists of following stages of a wheat plant.

Sowing of what in Sindh take place between October and December.Farmers in Sindh have completed an estimated 97% of sowing target of 1.1 million hectares of wheat by end December (20). The share of Rabi crop (winter/spring crop) from wheat comes 73% as compared to 7% from pulses and 20% from other crops.Rabi crop season started from October and continues till March for sowing different crops including wheat.

In Pakistan, the wheat areas are divided into Irrigated & Rain fed.