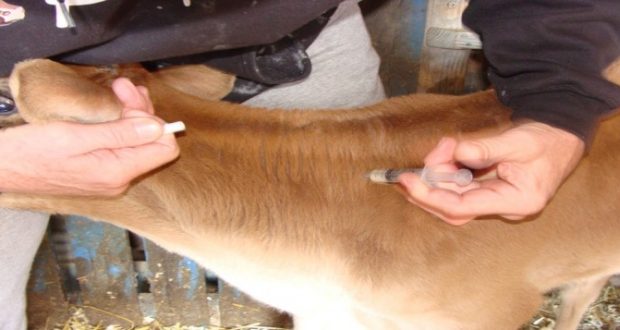 USE OF OXYTOCIN IN DAIRY ANIMALS AND ITS HARMFUL EFFECTS

Oxytocin is a hormone released from anterior pituitary gland in animals as well as human beings. This hormone is protein in nature and it is transported through blood from the site of release to the site of action. In Pakistan, unfortunately oxytocin is being used blindly by farmers living in villages for milk let down in their animals without knowing its harmful effects on their animals. Farmers are using oxytocin injection before milking almost twice a day in cattle and buffaloes for this purpose. The purpose of using oxytocin injection in their animals by the farmers is to get more milk and hence, to get more profit after selling more milk to people but they don’t know its harmful effects on animals. The farmers are using oxytocin without the veterinarian’s advice and the purchase of oxytocin does not require any prescription and is easily available even on a general store of villages. It is widely being used in the dairy industry despite there being a ban on its sale, except by a prescription from a registered medical practitioner.There are many adverse effects on humans due to consmption of milk obtained from animals subjected to oxytocin injections. Medical experts have pointed out that use of the drug can cause hormonal imbalance in humans. Due to hormonal imbalances created by exogenous source of hormones like oxytocin in milk and dairy products, the age at which girls attain menarche has come down drastically from 16 years of age to 10 years of age. Boys have been diagnosed with gynaecomastia (breast enlargement). It is very harmful for humans who unwittingly are made to consume an artificially created hormone. Humans face all the harmful effects of this drug. Children are most susceptible to its effects and it is known to have caused imbalanced hearing and weak eyesight. Common symptoms are exhaustion and loss of energy pregnant women should avoid milk that may have been adulterated with oxytocin because use of such milk by the pregnant women may lead to abortion and babies may born with deformities and low resistance levels. Use of such milk also increases the risk of haemorrhage in mothers after birth. Individual women may be hypersensitive to oxytocin and it can inhibit breastfeeding. Oxytocin seriously affects the growth of hormones especially in females because of which minor girls attain early puberty. After oxytocin is injected into the cow, and the milk produced is consumed immediately by pregnant women, then there is the likelihood of abortion but if milk is boiled properly prior to use then this can be avoided.