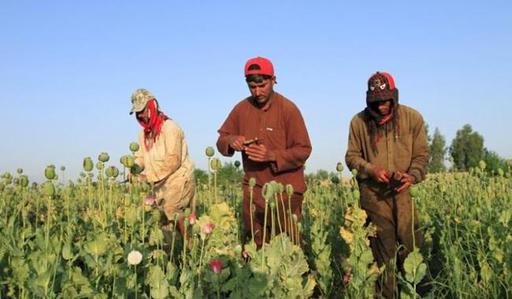 KABUL: Afghanistan saw a 10 percent jump in opium cultivation this year, highlighting bumper harvests owing to collapsing eradication efforts amid growing insecurity and declining international counter-narcotics assistance, the UN said Sunday. Cultivation dropped last year due to drought conditions but it has been on the rise in the past decade, fuelling the Taliban insurgency and spurring a growing crisis of drug addiction despite costly US-led counter-narcotics programmes. High levels of cultivation this year meant the estimated opium production soared 43 percent to 4,800 tons, a UN Office on Drugs and Crime (UNODC) report said, highlighting a “worrying reversal” in efforts to combat the scourge of drugs. “The cultivation has increased by 10 percent this year compared to the same time in 2015 — from 183,000 hectares to 201,000 hectares,” counter-narcotics minister Salamat Azimi told reporters while releasing the UN report.

“Ninety-three percent of the cultivation has taken place in the southern, eastern and western parts of the country.” Officials cited favourable weather conditions, rising insecurity and falling international donor support as the main reasons for the increase in cultivation in Afghanistan, the world´s leading producer of opium. The southern restive province of Helmand remained the country´s top poppy cultivating province, followed by Badghis, Kandahar, Uruzgan, Nangarhar and Farah — all hotbeds of insurgent activity. “I believe with the existing equipment, facilities and civilian task force, we cannot fight the cultivation of poppy in insecure areas,” said Baz Mohammad Ahmadi, deputy minister of interior for counter narcotics. “The challenges of deteriorating security in different parts of the country took away the opportunities to destroy poppy farms.”

Eradication efforts appeared to have collapsed. A total of 355 hectares of poppy eradication was carried out this year, a 91 percent plunge from 2015. “In 2016, farmers´ resistance against poppy eradication operations was occasionally expressed through direct attacks on eradication teams,” the UN report said. “No eradication took place in the provinces with high levels of opium poppy cultivation due to the extremely poor security situation in those areas and logistical/financial challenges to organize the eradication teams on time.”

Afghanistan saw a drop in opium cultivation last year for the first time since 2009, a UN report said, citing drought conditions as a key reason for the decline. But that was seen as a temporary blip. Poppy farmers in Afghanistan are often taxed by the Taliban, who use the cash to help fund their insurgency against government and NATO forces. “Most of the conflicts in Afghanistan are financed by income from poppy. Anywhere you see poppy in Afghanistan you see fighting there,” said Ahmadi. International donors have splurged billions of dollars on counter-narcotics efforts in Afghanistan over the past decade, including efforts encouraging farmers to switch to other cash crops such as saffron. But those efforts have shown little results.