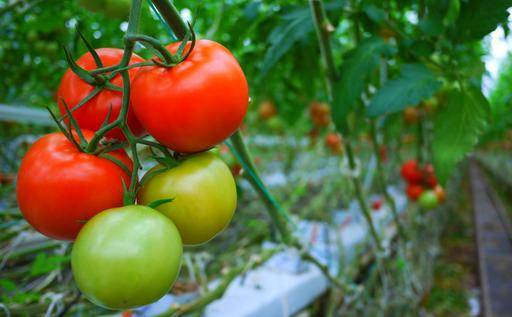 in Production Technology of Vegetables July 29, 2016

Tomato (Lycopersicon esculentum Mill.) is one of the most important vegetables worldwide. As it is a relatively short duration crop and gives a high yield, it is economically attractive and the area under cultivation is increasing. Tomato belongs to the Solanaceae family. Tomatoes contribute to a healthy, well-balanced diet. They are rich in minerals, vitamins, essential amino acids, sugars and dietary fibers. Tomato contains vitamin B and C, iron and phosphorus. Tomato fruits are consumed fresh in salads or cooked in sauces, soup and meat or fish dishes. They can be processed into purées, juices and ketchup. Canned and dried tomatoes are economically important processed products. Yellow tomatoes have higher vitamin A content than red tomatoes, but red tomatoes contain lycopene, an anti-oxidant that may contribute to protection against carcinogenic substances.

On a global scale, the annual production of fresh tomatoes accounts for approximately 159 million tonnes. However, more than a quarter of those 159 million tonnes are grown for the processing industry, which makes tomatoes the world’s leading vegetable for processing. Tomato production in Pakistan was 530 thousand tones during 2011. The nine largest producing countries account for 74.2 % of the world’s yearly production (2011).

Export of Tomato from Pakistan By Season

Tomato is a vegetable crop of significant economic value in Pakistan. Generally speaking annual export of tomatoes from the country averaged about 9832 tonnes during the past 5 years. Yearly exports are given below. The lowest export figures in 2006/07 and 2007/08 are attributed to bad crop harvest and rendering exports un-economical. Pakistan exported tomatoes to a quantum of 5692 tonnes, and earned rupees 77 million during 2009-10.

Per unit export prices are also low which apparently are attributed to produce quality. The destination-wise exports of tomatoes are given below:

The area, production and average yield of tomatoes in Pakistan is given below. Since 2000-01 to 2009-10, the area under tomato crop has increased from 27.9 to 50 thousand hectares and production has increased from 268.8 to 476.8 thousand tons. The present national yield of tomatoes based on ten years average is 10.1 tonnes/ha which is quite low. To obtain a potential yield, high yielding varieties and improved production technology have to be adopted.

The province-wise area of tomatoes based on the average data of five years (2005-10) is given below. Balochistan is the leading tomato province cultivating annually an average area of 18.1 thousand hectares followed by KPK and Sindh with area of 15.6 and 10.7 thousand hectares, respectively.

The province-wise production of tomato based on the average data of five years (2005-10) is below. Baluchistan is the leading tomato province producing annually 205.6 thousand tonnes followed by KPK and Sindh with production of 153.1 and 80.4 thousand tonnes, respectively.

Tomato is grown most of the year in some parts of the county. However, the supplies are substantially reduced during intense heat and rains of summer and monsoon months from June to August. In the hot-wet season, production shifts from lowlands to the relatively cooler and dryer highlands. Because high land production areas are limited, tomato supply dwindles in the wet season resulting in drastic price increases. Another period of stress is the onset of frost during December and January when production is depressed.