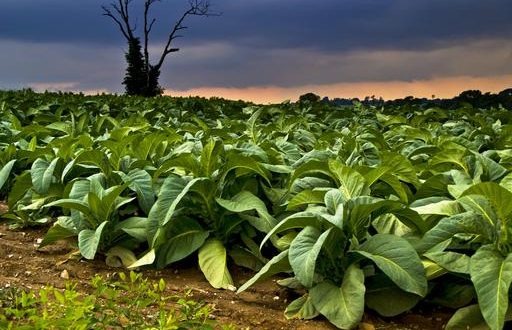 About 20 days after transplanting, when the plants get established, their young rootlets require very fine and pulverized sub-surface soil for their rapid growth and further expansion. Besides, inter-cultivation also helps in mulching, removal of weeds and proper aeration etc.

The crop is very often infested by ‘Orobanche’, a total root parasite. This weed is found to infest the field at the topping stage or at the later stage of crop growth. Orobanche is found to be attached with the tobacco roots. It is advisable to collect them and destroy as soon as they are seen in the field. For chemical control of Orabanche, a pre-planting application of EPTC
@ 6.0 kg/ha (1 month before planting) followed by post-planting application of 2, 4-D and

0.1% allyal alcohol have been recommended. Combination of herbicides like diphenamide, fluchloralin, oxyfluorfen, trifluralin prove effective in suppressing the weed growth in the crop.

Application of glyphosate at 1.5 kg a.i./ha along with ammonium sulphate at 10 g/litre of spray solution, 3 weeks prior to tobacco sowing suppressed weeds including nut sedge in tobacco nursery. Glyphosate at 1.25 kg /ha in combination with ‘ASPA’ – an adjuvant was equally effective in weed suppression.

Timely harvesting helps in production of better quality leaves. Out of two methods of harvesting viz. priming and stalk cut method, the leaves in the former method get sufficient time to attain optimum size till they mature and thus helps in increasing more desirable grades of leaves. The stalk of leaves should be separated from the harvest.

Immature leaves are gummy and of poor combustibility, while over matured leaves become scrappy and lack elasticity. Thus such leaves lead to high percentage of the low grade leaves. Braised and wilted leaves produce unsatisfactory cures of poor quality. The green leaves should be handled carefully. These should not be exposed to sun in the field for a longer

Tobacco leaves are cured after harvest. Curing is a process by which harvested tobacco leaf is made ready for the market. Curing is done in order to impart the required colour, texture and aroma to the final product. It is essentially a drying process whereby most of the moisture of the leaf is removed.

Temperature, relative humidity and air supply are the main factors affecting curing process. These are responsible for fixation of colour, yellowing of leaves and better quality of cured leaves. These factors vary from method to method of curing. Thus selection of suitable curing method from the following must be adopted with reference to quality of the finished products.

Rapid drying improves quality as compared to slower drying by old methods. In slower drying, the leaf gets discoloured. The cured leaves should be bulked by pilling them in heaps for improving flavour and aroma. Also the amount of moisture in the cured leaves must be regulated for better quality of cigar tobacco, which is called as reconditioning.

The flue-cured tobacco is raised with low level of nitrogen and harvested by priming method. The harvested leaves are strung on sticks which are then stacked into a flue-curing barn. Thebarn is artificially heated. The green leaves should be loaded in the upper half of the barn and the lighter ones in the lower half. The curing process consists of 3 stages namely (i) yellowing, (ii) fixing the colour and (iii) drying.

During yellowing, leaf is kept at a low temperature (32-35oC) and high humidity for about 30-40 hours till it attains a bright lemon yellow colour.

After yellowing, the temperature is raised gradually and humidity of barn is lowered by opening the ventilators. Great care is required in raising the temperature during this stage. It is raised by not more than 1-2oF every hour. The rapid rise in temperature, when the leaf is still wet, results in a bluish-black discolouration called ‘scalding’. It takes about 16-24 hours.

This is the last stage in flue curing process, which may last from 28-42 hours. The ventilators are closed and temperature is again gradually raised to 71-71oC to dry the veins and midribs of leaves. This completes the process. Now ventilators are opened to cool down the barn. The leaves are left in barn overnight for absorbing moisture and to come to normal condition for handling and storage.

Two types of tobacco, the Lanka tobacco in Andhra Pradesh and wrapper tobacco in West Bengal are air cured. Wrapper tobacco is harvested by priming method slightly at green maturity. The leaves are divided into groups according to their size and are strung on a string secured on a bamboo stick. These sticks are taken to barn with closed side and roof. The leaves are cured under atmospheric temperature. Relative humidity of 70-80% is maintained by sprinkling water inside the barn. The entire process is over in about 5-6 weeks.

Lanka tobacco leaves in Andhra Pradesh are strung on ropes in a shade for 8-10 weeks. During this period, the leaves turn yellowish brown. After this process, the leaves are placed in a pit for 24 hours and then transferred to the second pit for 48 hours and then back to the first pit for 24-48 hours. Fermentation of the leaf occurs during pit curing. After curing, the leaves attain a dark brown colour and fruity smell.

This method is adopted in case of chewing tobaccos. The leaves are harvested in such a way that a small portion of stem remains attached to the leaves. The leaves are wilted for a few hours in the field, then tied into bundles and hung in a smoke hut. They are smoked for about 12 hours by burning dried leaves of trees locally available. After the smoke treatment, the leaf is fermented in bulks for 3-4 days. The fermented leaves are given treatment with salt water or with jaggery.

A number of tobaccos are sun-cured. There are several modifications in sun-curing method.

curing whole plants on racks as in cigar and chewing tobaccos. After initial wilting in the field, the plants are strung on bamboo poles and cured in sun. The entire process takes about 15-20 days, ii) Curing leaves with pieces of stems on racks as in natu tobacco. In this curing, racks are not exposed to the direct sun. Therefore, it takes longer period (6-8 weeks) and iii) Curing whole plant on the ground as in bidi and hookah tobacco. In this curing, leaves are allowed to dry in sun on the ground and are turned over twice a day. This process continues for about a week and then heaps are made which are opened the next day and reheaped. This process of heaping, opening of heaps, spreading and reheaping continues for about 10-15 days. By the end of this period, the leaves become completely cured.