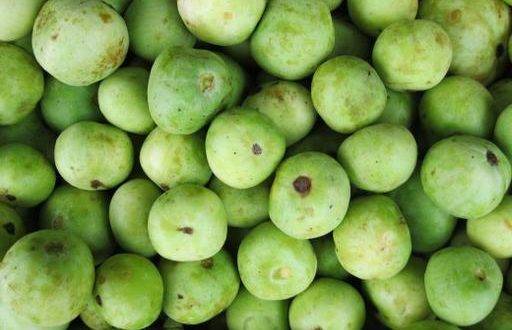 in Production Technology of Vegetables August 8, 2016

Sandy loam soils rich in organic matter with good drainage and pH ranging from 6.5-7.5 is best suited for Tinda cultivation. This crop requires a moderate warm temperature. Tinda prefers light or sandy soils where its roots can penetrate easily. Tinda is mainly cultivated in the lowlands, from sea-level up to approximately 1000 m altitude. It likes warm, sunny conditions of 25–30°C at daytime and 18°C or more during the night, and performs less well in cooler and humid areas. In India it is either grown in the dry season (February to end of April) or in the rainy season (mid-June to end of July).

Plough the field to fine tilth and form long channels at 1.5m apart.

Seeds are sown directly on ridges or on flat land after the soil has been prepared either manually or mechanically by ploughing, harrowing or ridging. Tinda is primarily grown as a sole crop. Three or four seeds are sown per hill at a depth of 2–3 cm, spaced at approximately 90 cm × 150 cm. The seedlings are thinned to one or two per hill at 3–4 weeks after sowing when they have 2–4 true leaves. This leaves a plant population of about 10,000 plants per ha.

The most suitable season for sowing of Tinda Seeds is January-February.

Treat the Tinda seeds with Trichoderma viride 4g or Pseudomonas fluroscens 10 g or Carbendazim 2g/kg of seed before sowing.

Sow the seeds on one side of the channel. hin the seedlings after 15 days to maintain two/pit at 0.9 m spacing.

Space of 36 to 48 inches may be maintained between each seed.

Weeding is done thrice to control the weed population. One or two weedings are required before the stems cover the soil attained in 6-8 weeks after sowing. From this stage, movement in the crop should be reduced to a minimum to avoid damaging the plants.

In case of prolonged drought, irrigation is required before ploughing. Watering 2–3 times per week is recommended during the dry season.

There are several virus diseases that can cause severe fruit abortion, defoliation and fruit distortion. These viruses are usually transmitted by aphids, thrips and white flies (Bemisia tabaci).

Virus infections can be reduced by spraying appropriate insecticides and by early planting before the heavy rains. The most serious pests are melon fruit fly (Dacus spp.) and leaf beetles (Epilachna chrysomelina), which can be controlled with insecticides.

Which can be controlled by spraying a carbamate fungicide.
Anthracnose (Colletotrichum gloeosporioides):

These diseases may be controlled chemically, e.g. by a weekly spraying with fungicides such as benomyl for 3–4 weeks.

Tinda is harvested at the nearly mature green stage when the fruit has a diameter of 10–12 cm and the seed is still soft. Harvesting can take place about two weeks from fruit set, depending on prevailing moisture and temperature conditions.