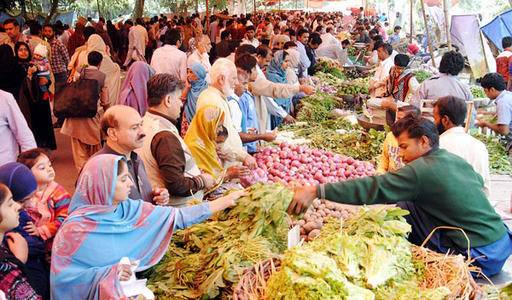 Lahore: Fruits and vegetables are selling at high prices in Sunday bazars also security situation remained vulnerable no extra measures have been taken so far. District administration has appointed civil defense volunteers who have no experience and orientation killing their time resting on chairs. Cabbage and Tomatoes were completely absent from the bazar. Tomatoes were being sold at Rs.70 with increase of Rs.15 while tiny size raw tomatoes also being sold at Rs.70 per kg. Price for Cauliflower become Rs.32 per kg. Cabbage were not available in bazar but outside been sold at Rs.50 to 55 per kg. Green chili reached at Rs.110 per kg. Lady finger was totally absent but price reached at Rs.95 per kg but wasn’t present at bazars. Peas Rs.40, Garlic China Rs.289, Cucumber Rs.35, Bitter gourd Rs.90, Spinach Rs.15, Gourd at Rs.21, Cauliflower Rs.32, Capsicum at Rs.50, Lady finer at Rs.95, Radish, Carrot desi Rs.22 per kg. However, Garlic desi been sold at Rs.90 reducing by Rs.30. Bringal at Rs.25 reducing by Rs.15, Lemon china at Rs.57 reducing by Rs.3, Ghia Kaddu at Rs.45 reducing by Rs.15, Turnip at Rs.7 and Carrot China at Rs.15 reducing by Rs.8 and Rs.10 respectively. In Fruits apple Irani at Rs.140, White at Rs.60, Kinnow at Rs.120, Orange Rs.70, Guava at Rs.60 and Pomegranate being sold at Rs.200 per kg with increment of Rs.10 per kg.