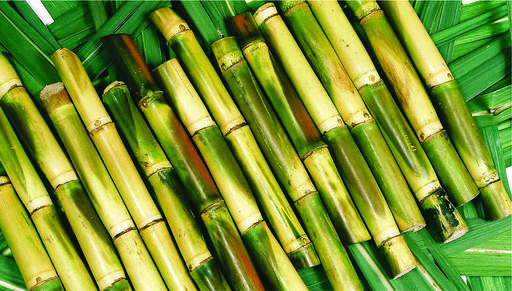 Whip smut, caused by Ustilago scitaminea is a most common disease of sugar cane. The affected canes produce long, black whip-like and coiled or curved shoots, which are covered with a thin silvery membrane, containing masses of chlamydospores of the fungus. Infected plants should be removed from the field and brunt. Avoid ratooning of disease affected crop. (A.W Khoso)

For controlling sugarcane diseases, use healthy seed which is disease- free and preferably plant disease-resistant varieties. Treat the seed with fungicide/s before planting. The diseased plants from the field should be removed and either buried or burnt. Disease-free, good-quality seed increases yield by 10-15%.

The disease first appears as red bright lesions on the mid rib of leaves and shows itself as drooping and changing of color of upper leaves.

Withering of the leaves proceeds to downwards. Usually third or the fourth leaf from the top is affected and shows drying at the tip. The pith becomes red and later on brown. In severe cases, complete destruction of the stools is brought about. When the infected canes are spilt open, they gave out an alcoholic smell due to fermentation and show reddened areas.

If the ratoon crop is properly managed, it could give higher returns than the plant crop because of savings in certain field operations and inputs. It is important to remember that ratoon crop requires 30 to 40 per cent higher fertilizers than the newly planted crop. The end of January to beginning of March is the best time to keep the crop for ratooning. Cane from the fields to be kept for ratoon should be cut at ground level.
The sugar recovery in ratoon crop is also better and it matures earlier than the newly planted crop. However, remember that it has to be managed with extra efforts and care. Apply all the phosphorus and potash fertilizer plus one third of N during March. Plough the land in between the furrows to mix the fertilizer well in the soil and then irrigate the crop. Fill the gaps; control the weeds, insect pests and diseases properly. Rest of the nitrogenous fertilizer should be applied in two equal splits during April and May.

Stop irrigation 25 to 30 days before the harvest of crop and do not leave the harvested crop for long time in the field. In case it has to be kept for a prolonged period, it should be covered with trash. Different varieties planted may be harvested according to their maturity. Harvesting of early maturing varieties may be started during November, mid-season varieties during December and the late maturing varieties during January. The crop harvested during February – March gives good ratoon crop.
Harvesting is done when the crop has fully matured and ripened. Early varieties and ratoon crops are the first to be harvested. When the stem is close to the surface, great vigilance is required in order to cut the maximum portion of the stem, which is valuable both for its weight and sugar content. The harvested cane should be immediately hauled to the mill otherwise weight and sucrose losses may occur.