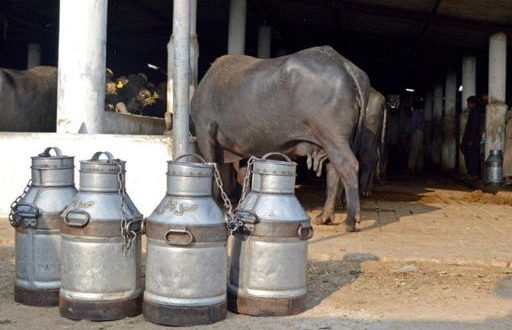 FAISALABAD: Eight years ago, after graduating from the University of Agriculture Faisalabad, Basharat Jaspal decided to try his luck in retail business. Today, when he looks back, he feels it was one of the best decisions of his life. Jaspal started a dairy farm with five buffaloes and climbed the success ladder.

Within eight years, he became the owner of Sarbuland dairy and livestock farm in Faisalabad, which comprised over 500 buffaloes and cows. The cost of a single buffalo ranges between Rs200,000 to Rs400,000.

“I do not belong to a business-oriented family,” said Jaspal. “I am just an agriculture graduate with a humble background.”

The farmhouse sells roughly 3,000 litres of milk every day to Nestle, a multinational food and beverage company headquartered in Vevey, Switzerland, and, through his chain of stores, gives an annual turnover of Rs72 million.

Agriculture contributes roughly 21% to the total GDP but people attached with this profession are often out of touch with mainstream economic activities associated with the sector; the reasons being lack of education and modern techniques.

Pakistan is one of the top six milk producers in the world but farmers are not well equipped to avail benefits. The Buffalo Research Institute (BRI), funded by the Punjab government, is not fully functional as majority of the posts are vacant, reflecting government’s negligence.

He invited an American nutritionist and discovered that buffaloes needed good nutrition and a proper feed and environment to be viable for commercial purposes.

“Milk produced by buffaloes is the best, as it carries 60% less cholesterol compared to cow milk.”

Faisalabad is the top ranked city in terms of buffalo population. But the provincial government is reluctant to support the dairy sector and there are no proper buffalo vaccination programmes.

Jaspal is offering a four-month internship programme to students of Doctor of Veterinary Medicine (DVM) University of Agriculture Faisalabad.

To uplift the sector, another organisation “Buffaloes Breeding Association Punjab” has been set up to create awareness about the top ranked breeds.

Neeli Ravi buffalo is the best breed in the world. Indians considered their buffaloes ‘Murrah’ to be the best in the world but a recent research and international cattle shows proved that Pakistani Neeli Ravi was the world’s best.

Another of Jaspal’s cow won another competition organised by the University of Veterinary and Animal Sciences (UVAS) at Pattoki in 2012 by producing 62.38 litres milk in a day.

The Neeli Ravi breed bull provides plenty of meat which is in demand across the country. The bulls are used for improving the milk productivity of dairy buffaloes usually through artificial insemination.