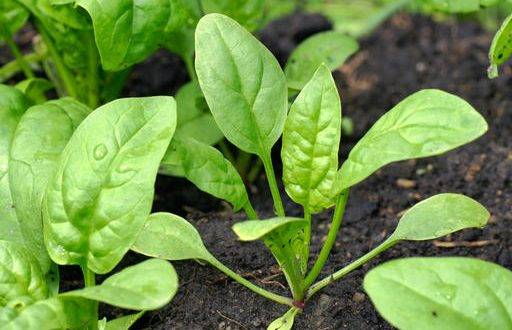 in Production Technology of Vegetables July 30, 2016

This is an important vegetable of Rabi season and requires a cool and moist climate. Low temperature and high humidity helps in the development of succulent, tenders mild flavored foliage and quick growth. The plant prefers sunshine.

For seed development and maturity, plant requires long and warm days. Spinach germinates best at soil temperature below 10-12c. At high temperature, the seed fails to germinate because they enter into a dormant state which continues until the temperature again falls below 10-12oc.

Spinach can be grown successfully on a variety of soils, but a fertile sandy loam high in organic matter is preferred. The use of cover crops and green manure crops is recommended to maintain the soil organic matter. The soil pH should range between 6.4 to 6.8. Spinach is very sensitive to acid soils, thus a soil test prior to planting this crop should be made. Low germination, yellowing and browning of margins and tips of seedling leaves, browning of roots, general slow growth and even death of plants, may indicate that the soil is too acid. If the pH is too high, leaves may have a yellow color referred to as chlorosis.

A well-prepared seedbed that is free of large clods permits precision planting with rapid and uniform emergence of spinach seedlings. Uniform depth of seeding is critical when using pre-plant-incorporated herbicides because if spinach seeds are planted too deeply, seedlings may be killed by herbicide. Well-prepared seedbeds also permit proper and accurate incorporation of pre-plant-incorporated herbicides, leading to improved weed control and reduced phytotoxicity to seedlings. In situations where cultivation can be used, uniform beds with level bed tops are essential.

Spinach requires abundant moisture to insure a high quality product. An application of one inch of water every seven to ten days, when rainfall is inadequate, is recommended. Keep soil moist until seedlings have emerged.

Winter spinach is best when sown in August. Summer spinach can be started in February and needs lot of water.

Around eight to ten seed per acre is recommended. Seeds are broadcast on the flat beds or in ridges and are mixed with fully prepared soil sans pressed with some hard material immediately after sowing seed, irrigation water is applied.

There are two varieties of spinach in Pakistan. Local Sindhi and prickly heat.

Spinach requires a high level of fertility, especially nitrogen. Early spring spinach may require larger quantities of fertilizer than fall crops. Per acre requirements on sands and sandy loams are 85 to 120 lb N; 75 to 85 lb P2O5; and 85 to 150 lb K2O. On heavier clay soils, 50 lb/acre of each nutrient should be adequate. Fertilizer is often broadcast and worked into the soil prior to seeding. If the fertilizer is banded at seeding, it should be placed along each side of the rows 2 to 3 inches below the level of the seed.

Hand-weeding is an expensive component of crop production budget. If a weeding crew is sent into a field before the harvest when weeds are mature, weed removal is typically slow and expensive. Ideally, good cultural practices and careful use of herbicides will result in minimal hand-weeding requirements.

After planting the crop, there are two periods in which herbicides may need to be applied, depending on the weed species present. Post plant treatments are applied after planting but before the first irrigation and the emergence of crop; post emergent treatments are applied when spinach is in the seedling stage or older to the side of the row; fertilizer should never come in contact with the seed.

Spinach is sold loose, in pre-packaged bags, or frozen. Fresh spinach loses much of its nutritional value with storage of more than a few days. While refrigeration slows this effect to about eight days, spinach will lose most of its folate and carotenoid content, so for longer storage it is frozen, cooked and frozen, or canned. Storage in the freezer can be for up to eight months.

The crop is ready for cutting within six to eight weeks after sowing. The cutting is done 2cm above the ground level when plants have put five to six leaves. New foliage is cut later with three to four cuttings.

Spinach aphid and leaf miner are the two predominant insect pests of spinach. These insects are controlled by timely spray recommended by agricultural department