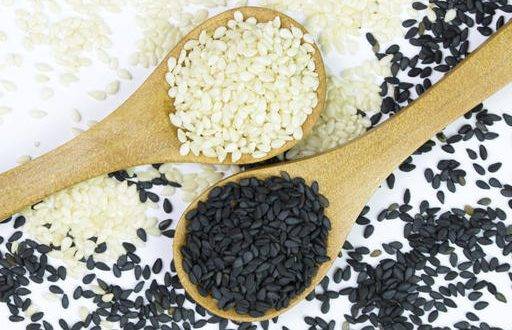 Sesame or “til” is the most ancient crop cultivated for its oil in the sub-continent. Its seeds contain between 50 and 58 % of very good semi-drying oil, mostly with oleic and linoleic triglycerides. Its oil is stable and does not rancid even after long exposure to air. Sesame oil contains about 22 % and the cake about 42 % protein. Sesame oil is used as foods (cooking and salad), medicine and soap manufacturing etc. Its seeds and young leaves are eaten as stews and soaps in Asia.

In Pakistan, the average area under sesame was 30300 hectares during 1985-90, whereas the average yield was 395 kg/ha. In the year of 1992-93, the area and production increased upto 82200 hectors and 34000 tons/ha and yield was 414 kg/ha. During 1996-97, both the area and production of sesame again increased to the tune of 99500 hectares and 45000 tons/ha and yield also increased to 452 kg/ha. During 1998-99 the area and production decreased upto 20 % while yield kg/ha remained the same as in previous years. According to FAO estimates, Honduras and Egypt are the leading countries producing yield of 1267 and 1063 kg/ha, respectively. It has been proved in the country and abroad that the yield potential of the “til” cultivars is upto 2000 kg/ha. Therefore, the farmers must increase the area under this crop and adopt below mentioned technology recommendations to boost per unit area productivity of sesame in the Pakistan.

Sesame is mostly grown on light sandier soil as rain-irrigated crop in the semi-arid tropics and requires high temperature of 35-40 C for vegetative and reproductive growth. This crop can mainly be grown in kharif season, and is very sensitive to excessive rainfall and water logging.

Although sesame grows best on high fertilize soils, yet most suitable soils are those that possess the following properties:

After soaking irrigation or rain, 2-3 ploughings and 1-2 planking are enough to prepare fine level seed beds to ensure even seed germination.

As kharif crop, the following sowing times are observed throughout the country for sesame cultivations:

Optimum planting density (222000 plants/ha) or 22 plants per meter is very important for high yields. To ensure good germination and crop establishment, seeds with germination percentage of 85-90 % must be planted. The optimum seed rate is recommended as under: