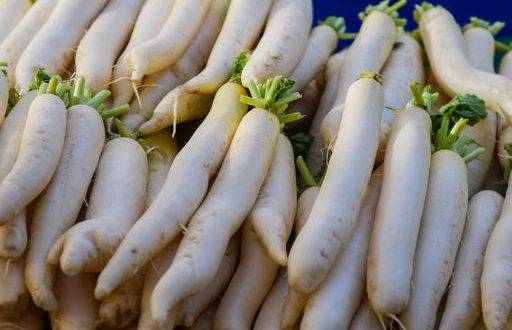 in Production Technology of Vegetables August 6, 2016

Radish is essentially a cold-season crop and can be cultivated throughout the year but October to January is the best period. The high temperature of summer causes the plant to develop small tops, and roots rapidly become pithy and strongly pungent after reaching maturity. For this reason it is difficult to produce quality radish during midsummer.
Because radish grows rapidly, a rich, fertile sandy loam soil having capacity to retain moisture for a long period is considered the best for radish cultivation. The soil should be free of stones, clods, lumps, and non-decayed organic matter.

Thorough seedbed preparation is essential to insure uniform depth of planting. A fine, well-prepared seedbed is important for growing radish. Application of farm yard manure approximately six weeks before sowing of crop helps build up the water-holding capacity of the soil and balance the nutrient supply. The land should be levelled followed by two to three deep plugging and 20-30 cartloads of well-rotten farm yard manure per acre mixed in soil followed by watering.
Ridges should be made followed by two plugging. Before ridge making one bag of DAP, half bag of urea and one to two bags of sulphate of potash (SOP) per acre should be added so that fertilizer may get mixed in the soil. Ridges should be made at a distance of two to two and half feet apart with a height of about one to one and half feet. Two bags of urea should be given in three in three split doses i.e. at first, second and third weeding respectively.

Three to four kilograms of seed per acre is required. Most commonly growers grow Chinese and Japanese varieties. As per survey conducted by the Technology Transfer Institute, Tando Jam, 90 per cent growers in the Sultanabad area grow Chinese varieties whereas 10 per cent grow Japanese varieties. The best method of sowing seeds is that on both sides of ridges 2-3 cm deep lines are drawn and seed is drilled into these lines followed by covering with thin layer of soil.

To produce high quality radish, there is a need to maintain satisfactory soil moisture throughout the growth of the plant. After sowing of seeds water should be applied but it should be taken into account that water neither submerge the ridges nor remain below the seed surface because in both conditions germination will be badly affected. Excessive irrigation’s during the summer season lead to stunted growth. Irrigation’s should be applied at weekly interval in summer and at fortnightly during winter.

When after second irrigation germination becomes complete and plants attain a size of 5-7 cm thinning should be started and plant to plant distance maintained at 5-7 cm as well. Thinning should be done well in time because late thinning results in weaker plants and no thinning leads to reduced and distorted radishes.

As a member of the Cruciferae family, radishes are attacked by the same pests which attack cabbages and cauliflowers. Major pests include cabbage white butterfly, aphids and diamondback moth. Other pests of crucifers can cause damage from time to time. Growers generally do two to three sprays to control these insect pests.

Because of the short growing period, only a few diseases cause economic losses in radish. The most important is black rot, a disease caused by a soil-borne fungus. Dark irregular patches develop on the radish root and eventually give the entire root a black color. Long-rooted cultivars can be severely attacked. The round types may escape infection in infested soil but are not resistant. The disease is controlled by good soil drainage and crop rotations of 3–4 years. Radish is also attacked by white rust. This disease causes raised white pustules on the leaves, stems and flowers. It is controlled by the destruction of diseased crop residues, rotations of 3–4 years and the separation of young from old crops.

Under normal conditions, harvest commences 40-50 days after planting. Roots are mature when they reach a satisfactory size. Turning of leaves from dark green to light green is the sign of maturity. The radishes are pulled and banded in the field
Harvesting should be done during the morning or evening time. Harvested produce should be thoroughly washed wrapped in bundles and marketed early in the morning. The bunch should be firmly tied with tape, string, twist-ties, or rubber bands. About eight to 12 roots are put in one bunch .Yield of 250-300 monds per acre can be achieved.