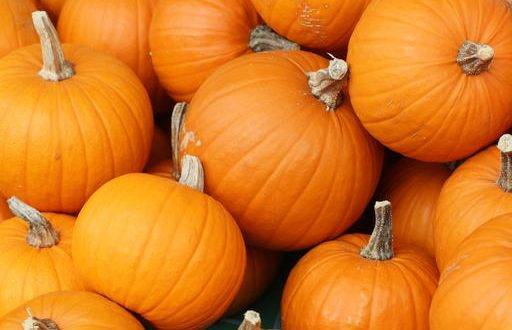 in Production Technology of Vegetables August 7, 2016

It is a favorite and popular vegetable of many people during summer and rainy season. Pumpkin is one of the most important cucurbitaceous vegetable crops. The ripe pumpkins are used as cooked. It is one of the main vegetable in any festival. It is round or long in shape.

It is warm season crop. But it can withstand cool weather. The plant is also tolerant to partial shade.

Soil and its Preparation

Pumpkin is grown on all types of soils. But loam, sandy loam and clay loam soils are considered best for its cultivation.

Two crops are raised commonly in the plains during January – March and June – July. Seeds are sown in well prepared pits at a spacing 3 X 3 m. about 4-6 kg. of seeds are required to raise one ha. Layout ring and basin is used.

One or two weeding may be done during early stage of growth. No irrigation is given to rainy season crop. The summer season crops should be irrigated after third or fourth day.

Pumpkin is harvested either in green or mature stage according to market demand. The fruits can be stored for a few months provided they are dept in well ventilated rooms. The yield may range from 15 to 25 t per ha.

Halloween is famous variety for cultivation

This disease is evident by a wilting and browning of the leaves. Sometimes the leaves will firm up at the end of the day, only to repeat itself the next morning, and get worse each time. This can sometimes be confused, with wilting due to lack of water or high temperatures. Wilting from lack of water results from either a literal lack of water in the soil or the vine ends not getting enough water as the fruit is sucking up all the nutrients. The acid test for bacterial wilt is to take one leaf and cut it an inch or so from the vine. If the sap that drains out is yellow and stringy, you have confirmed the presence of Bacterial Wilt disease.

Beetles are the most common but easily treated pests on pumpkins. Spray your vines with a mild pesticide and they should disappear.

Aphids are pests on pumpkins that don’t necessarily do damage except in large numbers, when they can yellow leaves and produce a nasty, sticky substance called honeydew. Even in small numbers, however, they can spread diseases among pumpkin plants. Light insecticides should kill off an aphid infestation, but they can also be combated by a strong spray of water, the introduction of natural predators like ladybugs, and the installation of reflective mulch.