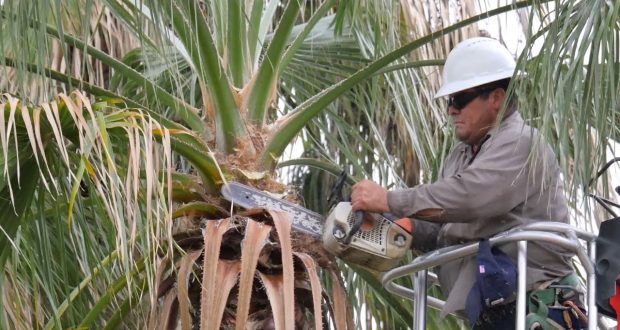 Pruning should be done in date palm during December.

Agriculture Expert have directed farmers to do pruning and trimming in date palm. They have been instructed to prune the old branches and to remove dried and diseased fronds. Spines present on new fronds should be trimmed. After pruning and trimming, fertilizers must be applied.

During December, total amount of the recommended phosphorous and half of the nitrogen should be applied to date palm plants. They said that 4-5 kg SSP or 2 kg TSP and 1 kg Urea should be used for per plant. For non-bearing plants the half amount of the chemical fertilizer with farmyard manure should be given before 30th November and the remaining amount should be given during last week of January.

They said that fertilizer should be applied 1 ft. away from the base of plant and it should be applied according to the canopy of the tree. By this way of application, higher production can be ensured. Irrigation must be done after hoeing. The process of pruning and trimming must be done before 31st December. Old and dried branches must be removed and spines on both previous and new growth must be trimmed.

2018-11-26
bkk_admin
Previous: First irrigation for wheat crop must be applied after 12-18 days of sowing.
Next: Wheat production target set at 10 million hectares and sunflower at 2 lac 50 thousand acres, Punjab Government.