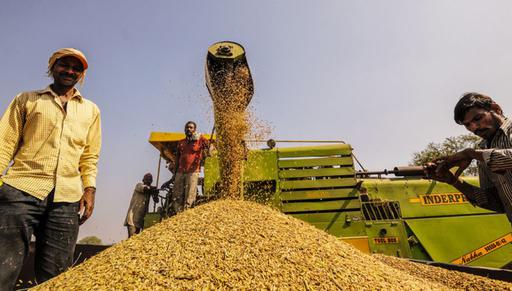 THE findings of a recent global survey which classified Pakistan as a country with a “serious” level of hunger was alarming but not surprising. The International Food Policy Research Institute or IFPRI concluded that 22 per cent of Pakistan’s population was undernourished. Alarmingly, Pakistan stood at 107 in a ranking of 118 developing countries, giving it a spot not too far ahead of war-shattered Afghanistan at number 111. As with any research, it is possible to find room for reviewing these numbers for further analysis. But the harsh reality of Pakistan facing one of the worst crises surrounding the matter of food security will remain largely unchanged.

In the past 12 to 18 months, there has been a crash in Pakistan’s commodity prices triggered by a combination of globally plummeting commodity prices and internal policy failures. The trend appears to be far more worrying for Pakistan’s future than what has been officially acknowledged. Unless Pakis­tan’s more than half-crippled agricultural sector is reshaped through a major set of sweeping reforms, prospects for the future will remain bleak. The contraction in agriculture across Pakistan during the last financial year has meant that anywhere between 50pc to 60pc of Pakistan’s population which relies on farm incomes, was badly hit. Anecdotal evidence from Pakistan’s rural belt has suggested a deepening of the crisis as consumer spending significantly contracted. This ranged from accounts of falling investments in farm inputs to farmers staying away from essential periodic investments such as the purchase of tractors and other implements, just to sustain themselves.

Meanwhile, the agriculture policy failure under the present government has been driven mainly by misplaced priorities and a refusal to take badly needed remedial steps. In other areas of macro choices, agricultural policies at the federal and provincial levels remain hostage to a lack of attention by members of the ruling structure. Key areas of central relevance to a farm economy, ranging from the cost of inputs to returns from outputs, remain out of sync with the enormous scale of the challenge. Government-run ‘research’ institutes meant to be dedicated to keeping a constant watch on key crops, notably wheat, rice, cotton and sugarcane, appear to have done little ground-breaking work. Instead, farmers have been forced to rely on the more expensive and not necessarily reliable private providers of inputs ranging from seeds, pesticides and other inputs.

And last but not the least, Pakistan’s all too well known crisis of governance has naturally hit agriculture too. Again anecdotally, there is widespread evidence suggesting adulteration of pesticides and fertilisers with little hint of a well-organised campaign to curb this menace. Meanwhile, notwithstanding the scale of the crisis whose consequences will target more than half of Pakistan’s population, key elements of the agricultural sector just don’t figure among the government’s top priorities. The scale of the prevailing crisis is such that the pursuit of large-scale glitzy projects, notably air-conditioned buses and more motorways needs to be halted, at least temporarily. A refocused approach towards tackling short-term ailments followed by long-term steps will just begin to tackle a crisis that has brewed for long and remained unattended.

For the moment, it’s possible that the gravity of the crisis surrounding Pakistan’s farms has yet to figure on the radar screens of mainstream policymakers. At a time when Pakis­tan has very recently concluded an IMF loan programme, a sense of comfort prevails all around. Tackling Pakistan’s agriculture-related challenge is as fundamental as addressing other vital issues for the economy such as continuing energy shortages. Without successfully tackling such challenges, any economic recovery will simply not be sustainable.