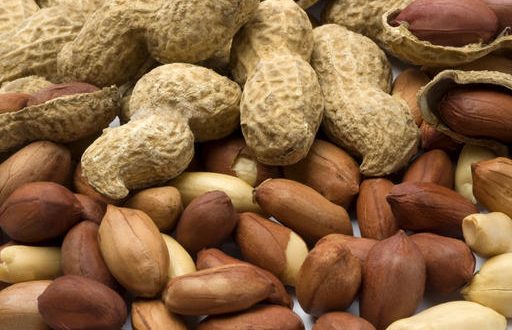 in Production Technology of Crops June 25, 2016

Insects, diseases and vertebrate pests and their control

Termites, are controlled by the application of Furadan granules (3 G or 10 g) mixed with fertilizer at planting.

Aphids can be controlled by spraying dimecron, Thiodon 100% @ 1 litre/ha mixed with 50 gallons of water.

Red hairy Caterpillar (Amsacta albistriga Wlk) the is most abundant insect in groundnut growing areas of Pothwar (Punjab) and Swabi (KPK). Spray of systemic insecticides such as dimecron 100 % @ 1 kg / ha, Buldock and Karate @ 250 g / ha should be done.

Diseases have the least impact on groundnut production in Pakistan. However, early leaf spot (Cercospora arachidicola) and late leaf spot (Phaeoisariopsis personata) is prevalent and common disease in Pakistan. By the attack of this disease some times complete defoliation of leaves may cause significant yield reduction. This diseases can be controlled (chemically) by one or two strategically timed applications of fungicides such as Chlorothalonil (Daconil) and Dithane M-45 (2 %).

Viral diseases (Peanut Bud Nacrosis and Peanut Clump Virus) have also been observed from groundnut growing areas. Some seed born fungal diseases also attack the seedlings before emergence. It is therefore recommended that the seed should be treated with a proper fungicide before sowing

The second largest yield reduction associated with groundnut pests in Pakistan is caused by infestation of a variety of vertebrate pests i.e. rodents, wild boars, porcupine, desert hares and crows.

Among the animals damaging the groundnut crop, rates are serious pests which cause sometimes as high as 60-70 percent. Two types of chemicals available to control the rodents are zinc phosphide and Racumin. Baiting must be done regularly over a period of 4-5 days until crop is mature to ensure good control. These baits are also available with vertebrate pest control laboratory at NARC. Burrows can be fumigated, using Dietia capsules or Phostoxin/Agtoxin tablets which are readily available in the market.

This animal roots out groundnut plants, generally scooping out a depression from 5-10 cm deep. Mostly, plant roots are exposed and plants are withered around. They can be controlled by physical methods i.e. Shooting, trapping and chasing etc. Special campaign is required to control this animal. Chemical control is more effective and viable than physical measures. Baits made from Sodium Monofluoroacetate or Zinc phosphide with crushed wheat and maize grains and brown sugar can be used. Before using the baits, unpoisoned baits are laid out for two -four days for feeding the animals. When wild boars start feeding unpoisoned baits, poison mixed baits should be placed for rebait.

The Indian-crested porcupine recognized with black and white quills is also a serious pest of this crop which damage the plants by clawing the groundnut roots. Fresh burrows should be located by observing feet tracks, and shed quills. There are two methods to control these animals, i.e., fumigation and baiting. For baiting Sodium Monoflouroactate (1080) can be smeared on cut potatoes or apples and placed deep in burrows. Racumin bait by mixing of 1:19 ratio of racumin and wheat flour with gur or brown sugar can be used. For fumigation, 6-8 Phostoxin or agtoxin tablets should be placed deep into the burrow and the den is sealed firmly with vegetation and soil.

Timely harvesting of groundnut is an important factor for getting higher yields like other crops. Early digging results in lower maturity and lower yield. Late digging results in more leftover losses in the soil and high digging cost due to dry and hard soil. The optimum time of groundnut digging is determined by digging a few plants from the field and counting the mature pods. Digging should be stared when 70-75 percent pods are mature. Crop should be properly digged out with hand tools such as Khurpa, kasola, Spade, and pods are picked up from the soil as much as possible. A tractor mounted digger is available and could be used for digging.

Once groundnut is dug and collected pods must be separated from vines by hand or beaten and winnowed. This whole process is expensive, time consuming and labour intensive. Profit from groundnut production can be enhanced by mechanizing this process and reducing the cost of production. For this purpose, a PTO driven FMI thresher, commercially available with local manufacturers, can be used.

After digging, the produce is cured by sun drying for about 6-8 days to maintain the desirable flavour and quality. At the time of digging, pods contain about 40-50 % moisture which should be reduced to 8-10 % by curing for safe storage. Well dried cleaned pods should be properly stored. Excessive humidity in the store favours the fungus growth on the pods which can damage the seed.

Groundnut is a good source of edible oil as it contains about 50% oil of good quality. Groundnut oil is one of the best cooking oils due to its high smoking point and is desirable for use in ghee, margarine, shortening and salad oil. The meal contains 25 % protein and considered best meal for human consumption and livestock feed. Groundnut is also an excellent source of vitamins and contains high levels of thiamine, riboflavin and niacin.