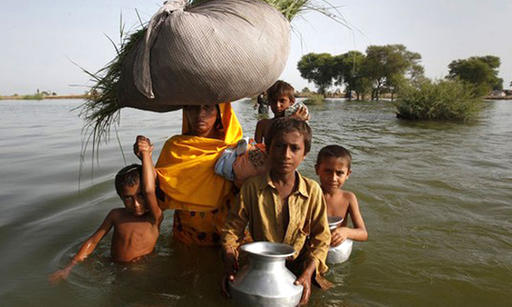 Hamid said the country faces several major risks related to climate change, including glacial melt, variable monsoons, recurrent floods, rise in sea level and higher average temperatures and frequency of droughts. Economic losses suffered during floods in 2010 and 2011 alone surpassed $15 billion, he said. “These threats pose major survival concerns for Pakistan, particularly in relation to the country’s water, food and energy securities,” he said. “They have enormous adverse consequences for all socioeconomic sectors, including agriculture and livestock, water resources, marine and land ecosystems, forests and biodiversity, infrastructure and human health.”

The country contributes only 0.8 percent to the global greenhouse gas emissions, ranking 135th in the world. Between 1992 and 2011, the country ranked 8th amongst the countries most vulnerable to climate change, according to the Global Climate Risk Assessment Index developed by German Watch. However, it was the 3rd most affected country for 2011. Minister Hamid said the government developed policies and plans, including both adaptation and mitigation measures, to cope with the climate change impacts. “A number of policy initiatives have also been taken to tackle climate change issues,” he said.

The national climate change and national disaster risk reduction policies, adopted in 2012, identify the goals and objectives as well as the proposed policy measures to mainstreaming climate change concerns in decision-making at national and provincial levels in all sectors of the economy. “Preparation of a national adaptation plan, nationally appropriate mitigation actions and a second national communication to the United Nations Framework Convention on Climate Change Secretariat is also envisaged,” the minister said. “All the provinces are also developing their own action plans to facilitate the implementation of policy.”

2016-10-20
bkk_admin
Previous: Experts call for protecting indigenous livestock breeds
Next: Ladyfinger not only a diet but also natural source against dangerous diseases