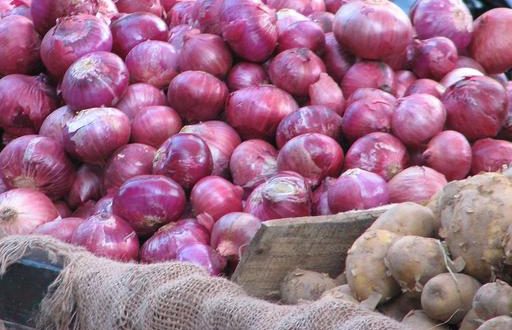 in Production Technology of Vegetables June 26, 2016

Onion (Allium cepa L) is one of the important condiments widely used in all households all the year round. The green leaves and immature and mature bulbs are eaten raw or used in preparation of vegetables. Onions are used in soups, sauces and for seasoning foods. The small bulbs one pickled in vinegar. Recent research has suggested that onions in the diet may play a part in preventing heat disease and other ailments. Onion bulb is rich in phosphorus, calcium and carbohydrates. The pungency in onion is due to a volatile oil known as allyl-propyl disulphide.

Onion is an important crop in all continents with world production of about 25 million tonnes. There has been a progressive increase in area and production of onion in Pakistan. In 1998-99, the area increased to 84.3 thousand hectare, production 1138.2 thousand tonnes and yield was 13.5 tonnes/ha.

For production of seedlings, seed is sown in seedbeds 6-10 weeks before transplanting in the field. Onions are transplanted into the field 10cm between the plants and 20 to 25 cm apart in rows.

Well-rotten farm yard manure @ 25-35 tonnes/ha should be ploughed under during land preparation at least one month before bed preparation. Before transplanting, 70-80 kg of phosphorus, 50 kg of Nitrogen and 50 kg of Potash per hectare should be thoroughly mixed in the soil. This should be followed with a supplementary dose of 50 kg of nitrogen per hectare at the time of bulb formation.

The first watering is given immediately after sowing and transplanting. Afterwards subsequent irrigations should be given at 7-10 days interval. The watering should be discontinued before neckfall.

As soon as the young plants have become established in the field, they should be hoed for the control of weeds. Three to four hoeing are necessary for controlling weeds.

Insects and Diseases of Onion

Onion thrips (Thrips tabaci) are small, yellowish sucking insects, which feed on the foliage of onion plants. Thrips are most injurious during dry weather. Spraying with appropriate insecticide at weekly interval on the plants has given excellent control.

The downy mildew of onion (Peronospora destructor) is a fungal disease of onion grown in cool moist conditions. In humid weather, fungus develops as white or purplish downy growth over the leaf surface but in dry weather, only white spots are seen. Dithane M-45 or any other copper based fungicide can be used to control the disease.

Purple blotch (Alternaria porri) is a serious fungal disease of onion that occurs at temperature range of 25-30 0C with 70-90 percent relative humidity. The leaves and flower stalks show whitish flecks with purple colour centre, which on further development form dead patches. Spray the crop with Dithane M-45 at fortnightly interval before appearance of the disease. Keep the crop free from the weeds.

The Color of Onions

Bulb onions can be yellow, red, or white. Approximately 87 percent of the crop is devoted to yellow onion production, with about eight percent red onions, and five percent white onions.

ellow Onions are full-flavored and are a reliable standby for cooking almost anything. Yellow onions turn a rich, dark brown when cooked and give French Onion Soup its tangy sweet flavor.

Red Onions, with their wonderful color, are a good choice for lots of fresh uses or for grilling, charbroiling, and roasting.

White Onions are often used in prepared salads, white sauces, and is the traditional onion for classic Mexican cuisine. They have a golden colour and sweet flavour when sautéed.

Onion bulbs should be harvested after 75% of the crops have shown neckfall. Onion bulbs may be left on the surface of the ground for field curing until tops one fully dry. Three to four days field curing is desirable to improve the storage life of onion. One to two centimetres of the top is usually left on the bulbs to prevent entrance of disease organisms.