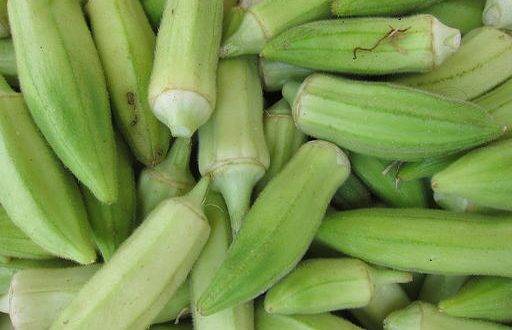 in Production Technology of Vegetables July 27, 2016

Okra or Lady’s finger (Abelmoschus esculentus or Hibiscus esculentus) is cultivated for vegetable purpose. It is an important crop of many parts of the world and is thought to be native either of tropical Africa or Asia. Okra is a popular summer crop, the young tender fruits are cooked in curries stewed and used as soups. It is a good source of vitamins A, B and C and is also rich in proteins, minerals and iodine. The stem of the okra plant provides fiber which is used in the paper industry.

Okra is a warm season, kharif crop, requires high soil temperatures and high day and night temperatures for best production, but the growers start its cultivation from January as off season-early crop for getting higher prices. Okra generally takes two months for harvestable pods, which extends from February through November, but most of the production occurs in the summer months. Okra can be picked every other day during the fruiting, and several times more if the crop is mowed and allowed to re-grow. Early and late sown okra sale out above Rs. 50 per kilogram, but normal retail rate is between Rs. 08 to 15 per kg and consumed by every body of each age. When okra is going to be prepared for cooking, little kids plays with both tip ends of fingers, without knowing health hazards due to presence of poison applied in field as pesticide.

The crop growth and yield is satisfactory in Pakistan but is still low in average yield as compared to other countries of the world viz. USA and Cyprus had around 20 t/ha and average yield in Kuwait was reported 68.8 t/ha, yield of 7-12 t/ha are considered good. There are several reasons of low yield of okra. Soil type and preparation methods, time and method of sowing, seed quality, irrigation and fertilizer applications, inter-culturing etc plays a pivotal role, but insect pest and diseases are also not negligible.

The diseases as well as insect pests found on okra vary from year to year. Their presence, incidence and severity depend up on host resistance or susceptibility and environmental conditions. Many researchers worked and find out the ways as ‘Integrated Plant Disease Management (IPDM)’ approach, which is less expensive and easy to adopt for disease control but most of the growers are unaware to these measures. Ratoon crop is not suggested in heavily infested crop field, but in case of ratooning, proper irrigation and fertilizer applications along with inter-culturing, weed and pest management practices must be ensured.

Okra plants attacked by a number of seed and soil borne diseases caused by different fungi. Root or collar rot and damping-off disease caused by Macrophomina phaseolina (Rhizoctonia bataticola), R. solani, Fursarium solani and Pythium butleri or root and stem rot caused by Phytophthora palmivora, spreading rapidly under optimum conditions and considered major problem. According to reports the root rot is one of the most destructive diseases, its incidence ranged between 10-80%, with a maximum (55-80%) in the crop grown on small scale as kitchen / home gardening and minimum (10-45%) in the crop sown on large scale under field conditions.

The fungi are reported to reproduce the diseases due to presence in the soil and seed or attached with infected plants. Naturally infected seeds appear brown to black and show die-back and root rot. The affected plants show dark brown to black discoloration from the base of stems. The root rot may be found on individual plants or infected plants seen somewhat scattered as well as found in groups of plants in patches. These diseases occurs in the crop grown on ridges in field as well as cultivated on flat beds as kitchen / home gardening. Severely infected plants become dead, their roots turn in to dark brown in color and badly damaged.

Many researchers worked out on the screening of disease resistant varieties, but none found completely resistant. Time of sowing, row and plant spacing, seed rate, water and other nutritional requirements, environmental conditions and mulching methods etc. are important for controlling diseases as well as boosting up the yields.

Some workers recommended chemical seed or soil treatment in field conditions and others evaluated different leaf extracts and oil cakes. According to report, the incidence of five seed-borne diseases (viz. Foot and root rot, Anthracnose and die-back, Cercospora leaf spot, Corynespora leaf spot and leaf blight, respectively caused by Fusarium oxysporum, Colletotrichum dematium, Cercospora abelmoschi, Corynespora cassiicola and Macrophonina phaseolina) have been found to be reduced by the use of seeds treated with fungicides and clean apparently healthy seeds, which also increased the seed yield by 21.62 and 15.31%, respectively, over the unclean farmers’ seeds. The lowest germination (95.0%) was recorded in unclean farmer’s seeds; while highest germination (99.0%) was recorded in treated seeds followed by clean apparently healthy seeds (98.5%). According to another report, the garlic extract is more effective than the onion extract for control of the Rhizoctonia solani, Macrophomina phaseolina and Fusarium oxysporum f.sp. vasinfectum causing same disease in cotton. Whereas castor, eucalyptus, grape fruit, purging cassia, bindweed, cocklebur, round-leaved mallow, rugles plantain, sour grass and water hyacinth aqueous crude extracts had no effect in this respect. The antagonistic fungi used as bio-control agent, such as Trichoderma harzianum, T. viride and Bacillus subtilis inhibited the mycelial growth of all root rot causing fungi tested in vitro. Soil infestation with each of the bio-control agents tested reduced the percentage of infected plants and severity of diseases. T. harzianum is the most effective one followed by T. viride and B. subtilis.

Experiments on effect of mulching methods on seed and soil borne diseases, physiological maturity and yield of okra revealed that straw mulching method had more effects on soil moisture conservation, resulting in vigorous plant growth and development with less disease incidence, followed by plastic mulching as compared to weed control and no weed control treatments, in normal summer okra crop. The results also concluded that straw mulching method had significantly more yield and fewer root rot incidence over plastic mulching and weed management practices. Whereas, it is also reported that mulching with transparent polyethylene sheet combined with garlic or onion aqueous extracts for 30 days caused a highly significant reduction in the percentage of diseased plants and disease severity, in the crop sown in winter or cool season.

Keeping in view the above facts the growers are advised to include plant extracts and mulch instead of fungicide application against seed and soil borne diseases, so that adopting low cost and pollution free crop production technology could produce the disease and poison free vegetable.

The disease is caused by yellow vein mosaic virus, transmitted by insect vector, the whitefly, Bemisia tabaci. The most susceptible stage of the crop is from 35 to 50 DAS. The initial symptom on young leaves is a diffuse, mottled appearance. Older leaves have irregular yellow areas which are interveinal. Clearing of the small veins starts near the leaf margins, at various points, about 15 to 20 days after infection. Thereafter, the vein clearing develops into a vein chlorosis. The newly developed leaves exhibit an interwoven network of yellow vein, which enclose the green patches of the leaf. Fruit develops on infected plants has irregular yellow areas which follow a longitudinal alignment. The fruits are also malformed and reduced in size. The fruits are mostly yellow, small, though and fibrous.

Correcting Nutrient Deficiencies is very important to all, because, otherwise the plants become week and susceptible to insect pests and diseases. Evaluation of soil fertility (for estimating initial nutrient level) and application of required nutrient in the shape of synthetic fertilizers, manures etc. with correct time, dose and method improve resistance against insect pests and diseases. This may also be remembered that injudicious excess use of nitrogenous fertilizers (urea) make feasibilities/possibilities to increase insect pest population and susceptibility to the diseases.

The population of whitefly must be reduced for reducing disease severity to obtain good harvest, but it must be kept in mind that the pesticides commonly used against white fly are equally poisonous to all livings and increase environmental pollution, hence be avoided as far as possible. The systemic insecticides have long residual effect, therefore not to be applied. Plant extracts and other less hazardous products may be used instead pesticides.

The Cultural Practices Such As,

Discouraging cultivation of okra in and around the cotton fields; inter-cropping with non host crops; collecting and burning diseased okra/bhindi plants; destroying wild host plants, cultivating white-fly resistant varieties should be preferred over others.

OLCD is suspected of being associated with a whitefly-transmitted geminivirus (Genus Begomovirus). The disease becomes major whenever vector is active. The disease is characterized by either upward or downward leaf curl accompanied by small and main vein thickenings (SVT & MVT) on leaves, pronounced on underside and stunted plant growth. At a later stage, all the diseased leaves develop enations which become prominent with time. Similar Integrated Plant Disease Management (IPDM) measures are suggested as recommended against yellow vein mosaic virus.

When the cooler part of the okra season is also dry (except for dew), the fungus coats the upper and lower leaf surfaces with a white coating of mycelium. Initially white superficial spots appear on leaves, but entire surface may cover with powdery mass. Diseased parts turn brown and the affected leaves start drying. If conditions remain ideal for disease development, defoliation also takes place, plant growth and fruit development badly affected and yields are considerably reduced.

Normal and judicious irrigation and fertilizer application followed by sanitation through inter-culturing for control of alternate host plants (weeds) is recommended. In case of severity, different foliar fungicides could also be used.

There are several fungi (Cercospora abelmoschii or C. malayensis, Alternaria sp., Ascochyta sp., etc), which cause different leaf spot diseases. Most of these are seed and soil borne or can also survive on plant debris and attack crops season after season. The leaves, stems or roots develop small, yellowish-green to brown spots. In some cases, the old leaves may also show water-soaked spots. The fruit develop small, raised rough spots or rot spots, or fruit may fail to set. None of leaf spot have been shown to cause economic loss. No control is recommended. However, precautionary measures include use of disease-free seed, crop rotation, and avoidance of overhead watering.