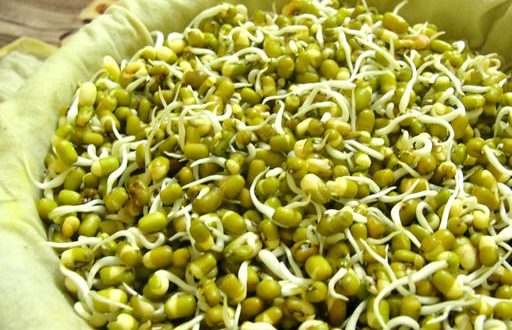 Mung bean (Vigna radiata) is grown mainly for its edible seeds, which are cooked, fermented, roasted, sprouted, or milled. In Pakistan, mungbean seeds, like other pulses, are split in a mill, separated from the husk, and then cooked as dal. Mungbean also is used in making soups, curries, noodles, bread, and sweets; the seeds roasted with spices are also very popular. Mungbean is easily digestible and high in protein, which averages 22–24%. The leftover leaves, stalks and husks of the mungbean plants are used as fodder, and the whole plant can be ploughed under as green manure for soil improvement. Mung bean is one of the important kharif pulses of Pakistan. It is also grown during spring season mainly in southern Punjab and Sindh province. Punjab is the major mung bean growing province that alone accounted for 88% area and 85% of the total mung bean production. Cultivation is concentrated in the districts of Layyah, Bhakkar, Mianwali and Rawalpindi. It is mainly grown in Kharif season (July October). Although it is grown in different crop rotations, about 75% cultivation follows mung bean – wheat crop rotation. With the development of short duration and uniform maturing varieties, mung bean can be fitted in various cropping systems. Research activities on mung bean have been mainly focused on the development of high yielding varieties with wider adaptability, resistant to diseases like mung bean yellow mosaic virus (MYMV) and Cercospora leaf spot (CLS), early maturity and insensitivity to photo period.

Mungbeans are in the Legume family of plants and are closely related to cowpea (in the same genus but different species). They are warm season annuals, highly branched and having trifoliate leaves like the other legumes. Both upright and vine types of growth habit occur in mungbean, with plants varying from one to five feet in length. The pale yellow flowers are borne in clusters of 12–15 near the top of the plant. Mature pods are variable in color (yellowish-brown to black); about five inches long, and contain 10 to 15 seeds. Self-pollination occurs so insects and wind are not required. Mature seed colors can be yellow, brown, mottled black or green, depending upon variety. These rounds to oblong seeds vary in size from 6,000 to over 12,000 per pound, depending upon variety. Germination is epigeal with the cotyledons and stem emerging from the seedbed.

Mung beans are a warm season crop requiring 90-120 days of frost free conditions from planting to maturity (depends on variety). Adequate rainfall is required from flowering to late pod fill in order to ensure good yield. Late plantings which result in flowering during the high temperature-low moisture period in July and August will reduce yield. High humidity and excess rainfall late in the season can result in disease problems and harvesting losses due to delayed maturity.

Mungbeans do best on fertile sandy, loam soils with good internal drainage. This crop does best if grown on fertile soils even without fertilizer application. Higher organic matter will lead to produce of vigorous seed. They do poorly on heavy clay soils with poor drainage. Performance is best on soils with a pH between 6.2 and 7.2 and plants can show severe iron chlorosis symptoms and certain micronutrient deficiencies on more alkaline soils. Mungbean has phosphorus, potassium, calcium, magnesium and sulfur requirements similar to other legumes which must be met by fertilizer additions if the soil is deficient in these elements.

For seed purpose there are two growing seasons of Mung crop.
i) February and March
ii) June and July
Too late a planting date results in bloom and pod fill during the hottest, driest period of the summer. In some areas mungbean is planted as a second crop after the small grain is harvested. If this is done planting should occur immediately after the grain harvest with a minimal disturbance of the seedbed.

Prepare the field by plowing, harrowing and leveling. The soil should be tilled to remove weeds and to prepare a seedbed which will provide good seed-soil contact. The final seedbed needs to firm with a surface free of clods and debris to allow a good distribution of seeds. If moisture is short, keep pre-plant tillage to a minimum to prevent drying out the top two or three inches.

Most suitable method of sowing is drilling. Broad casting is usually done in dry regions. The seeds are sown at 2 cm depth with a plant to plant spacing of 8 -10 cm and 30 cm between rows. If the surface layers are dry this depth can be increased to 3 cm if the soil type is one which does not crust easily. The seedlings of mungbean can have a hard time breaking through a thick crust and stands will be reduced. Planting equipment for soybean, fieldbean and cowpea can be used to plant mungbean but careful adjustments must be made to properly deliver and distribute the very small seeds. Populations of 150,000-200,000 plants per acre will be achieved.

Mungbean is an ancient and well-known crop in Pakistan. It is often included in rice or wheat based cropping systems in the tropics and subtropics. For example in Spate Irrigated areas, mung beans are commonly grown along with sorghum for dual purposes – fodders and grains. The short duration, early maturing and uniform in maturity are now the breeding objectives and such varieties are being developed and seed is multiplied for availability to farmers. Pakistan has released early maturing cultivars using germplasm from international and national sources. The mungbeans varieties released in Pakistan through National Testing Program are presented as under.

Seeds used for sowing must be from an authentic source. An authentic source is one that proves the genetic purity and other aspects of seed quality of seed being sown. Seeds used for sowing must also be vigorous, only then you can expect a good field stand. Before sowing, shrunken, shriveled, fungal infested and diseased infected seeds must be removed and only good seeds must be sown. Seed rate depending on the variety the seed rate varies from 8-10 kg per acre.

Mung bean is a short duration and drought tolerant crop therefore it requires less irrigation but to get maximum yield from irrigated areas 350 – 420 mm water is sufficient.

The field selected for seed production must not have been sown with green gram in the previous season. This is done to avoid volunteer plants that cause admixture. Fields continuously cultivated with green gram may harbor root rot or wilt pathogen. Hence, such fields must be avoided where ever possible.

Yellow Mosaic Virus: is the most serious problem of mungbeans in the country. The affected plants show yellow mottled symptoms. Planting of yellow mosaic virus resistant varieties is the best control measure. This is caused by a white fly therefore, control of fly is essential. The control can be made by spray of any suitable pesticide and eradicate the affected plant materials or burn the diseased plants to destroy the virus. Leaf Crinkle: is a disease caused by a virus which stays inside the seed and cannot be seen with naked eyes or ordinary microscope and is caused by movement of aphids. The leaves are crinkled and ultimately result into complete loss of production. The control is made by (a) using virus free and healthy seed (b) destroy the affected leaves (c) control of aphids which cause leaf crinkle (d) use disease resistant varieties. Insect Pest Management Aphids usually occur on mungbean. If you notice unusually high aphid populations (over 20 insects/ plant), spray an insecticide such as dimethoate once a week until aphids are eradicated. Bean fly is the most important insect pest of mungbeans. It causes significant damage during the seedling stage. The adult flies are too tiny and cannot be recognized easily. The bean fly maggots feed inside the plant stem and their damage cannot be seen from the outside. Mungbeans must be protected against bean flies. Monocrotophos or dimethoate can be sprayed at 3, 7, 14, 21, 28, and 35 days after emergence. The first three sprays are very important and must not be delayed.

Roundup (Glyphosate) is a pre – emergence non selective herbicide which is used before cultivation of land and it is contact herbicide which kills all the weeds. If 15 days before sowing field is pre irrigated with sufficient water to germinate most of the weeds when weed germinates then Roundup is applied. In order to control later emerging weeds, manual weeding done 30 days after sowing will be useful.

Pod maturity in mungbean is not uniform because the plants flower over an extended period. This makes it difficult to decide when to harvest. Generally harvest should begin when one half to two-thirds of the pods are mature. Seeds might be between 13%-15% moisture at this time. Swath the plants to allow further maturity of the pods and then threshed. This is an especially useful harvest system for the vine type varieties or when there is delayed maturity or problem weeds present. Swathing should be done earlier in the day to prevent severe shatter losses.