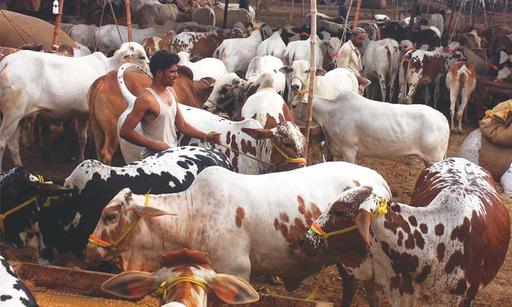 Mortality of animals costing 9 billion due to foot and mouth diseases: Secretory Livestock

1.5billion rupees granted for vaccination in animals: Naseem Sadiq. Lahore (NNI) Secretory livestock and dairy development Naseem sadiq said Mortality of animals costing 9 billion due to foot and mouth diseases every year. 136 districts of Punjab are granted 1.5billion rupees for vaccination in animals. Also 10 lac 75 thousand injection imported from abroad. Water is added by middleman in milk not by the owner. Livestock and dairy development Punjab has designed a plan for elimination of adulterated and unhygienic milk. He said in an interview there is no evidence of dangerous disease in Punjab. No mortality is seen in animals due to low quality silage.

Historical operation against Meat of dead, poor quality animal sellers. Adulteration of milk operation will not be embellished. He said congo came from Indonesia and Afghanistan and present in 2 cities of Punjab. But there is no health hazard to animals. He said we have prepared action plan for eradication of FMD. We will safe life of animals and provide food to people. Some people are spreading rumor which are baseless about silage everybody know their aims.