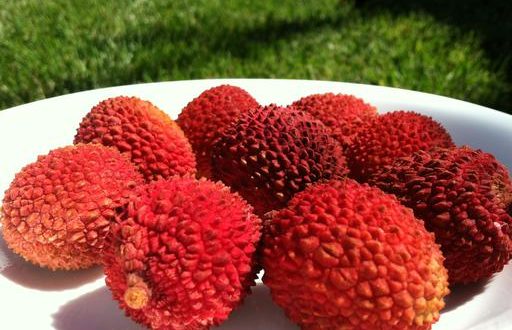 in Production Technology of Fruits May 11, 2016

Lychee plants and fruits are affected by insect pests and diseases, which causes considerable losses, if not managed. Lychee plants as compared to many fruit bearing species are least affected by diseases. A few leaf spot diseases have come to light that are caused by fungal pathogens. No bacterial or viral infections have been reported so far. Powdery mildew (Oidium spp.), anthracnose or leaf spot (Botryodiplodia theobormae Pat, Colletotrichum gloeosporioides Penz) and red rust (Cephalexros mycoides) are some diseases which cause some damage to the lychee crop, but severity varies from season to season even in the same locality. Their control measures consist of 1-2 applications of proper fungicides, while for red rust sulphur washes in September-October and February-March is sufficient.

Although about 40 insect and mite pests are reported to affect lychee trees and fruits at different stages of growth, erinose mite, lychee bug and fruit borer are the insect pests of most concern.

Lychee mite (Aceria litchi) is a serious pest in all the lychee growing regions in the country. The tiny nymph and adults stick to the under-surface of the leaf and suck the cell sap. Consequently, the young leaf turns yellow to greyish-yellow and a velvety growth develops on lower surfaces, which subsequently turn brown. The affected mature leaf develops continuous to scattered brown patches with curling, twisting and leathery structure, which ultimately result in blister-like gall formations. It spreads fast under favourable conditions and reduces the photosynthesis activity and increases leaf drop. As a result the tree becomes weak, and yield and quality of the fruit is severely affected. The pest is well studied. It is suggested to prune the affected twigs/branches and burn to avoid spread. Two sprays of karathene 0.05 percent at 7-10 days interval during the attack of the insect has been found to effectively control the pest. Application of neem cake has also been found to reduce the incidence of this pest.

In lychee orchards incidence of shoot borer is reported. The caterpillar bore inside the newly growing shoot and feed on inner parts resulting in drying of the twigs. In the case of severe infestation the sap movement is interrupted and the tree ceases to flush. Pruning and burning of affected twigs minimize the infestation.

The caterpillar (Inderbela sp.) bore inside the trunk/main stem. During the night they come out and feed on the bark protected by the large silken webs usually during July-September. The branch ceases growth and the stem becomes weak and may ultimately fall to the ground. The presence of the insect can be known by seeing the excreta and silky web. Cleaning of the infested area and plugging holes with petrol, nuvacron or formaline soaked material is advocated.

Besides the important pests described above, lychee are often affected by leaf eating caterpillars, leaf miners, bugs and aphids. Birds, bats and squirrels also cause damage to lychee fruits.

Weeds Compete for water and nutrients during the initial year of growth. Depending upon location more than 25 species of weeds are reported to be present in lychee orchards. Inter-culture operation and mulching suppress the weeds. Herbicides, although found effective for the control, are rarely applied. In mature orchards the weed problem is not encountered due to heavy shade and natural mulching by falling leaves.

Fruit cracking is one of the major limiting factors in the cultivation of lychee, especially early cultivars (Singh, 1986). The early varieties are more prone to the problem of fruit cracking in comparison to late cultivars. The low atmospheric humidity, high temperature and hot winds during fruit development and maturity stage favour fruit cracking. Light irrigation to maintain soil moisture and to improve humidity has been found to minimize this problem through maintenance of a better micro-climate. Mulching with farm residues and 3 irrigations significantly reduced the cracking (Singh, 1986) in a trial conducted on the cultivar Shahi. In addition, spraying with either 100 ppm NAA or 0.2 percent borax during the developing stage of the fruits has been found to be highly effective in checking the cracking.