Lucerne thought to have originated in Iran, from where it travelled to the Arab countries where it was called alfalfa, meaning “best fodder”. Afterwards it was introduced in Europe and called ‘lucerne’. Within the next 150 years it became a popular forage crop in many countries including Indo-Pakistan subcontinent. Lucerne is a multi-cut, perennial, legume forage crop. It is known as the ‘queen’ of fodders because of its unique and multiple characteristics. Alfalfa contains 18% protein, 11% carbohydrates, 85 fats and 30% fiber. The dry matter equally filled with nutrition containing calcium, magnesium and other mineral salts. It provides fodder throughout the year especially during the two periods of fodder scarcity in the country, May-June and October-November.

Lucerne is well adapted to a wide range of climatic and soil conditions, but it does best under conditions of low rainfall and high sunshine. It grows well in a dry climate on deep, well drained, loamy soil with a PH of 6.5-7. It can tolerate extreme heat and cold.

Seed rate and method of sowing:

Drill 15-20 kg/ha of healthy seed in lines 45cm apart in good wattar. Line sowing better than broadcasting because lines sowing facilities hoeing and other cultural operations in subsequent years. Lucerne is also broadcasted in some parts of the country.

A good seedbed is prepared with a furrow-turning plough followed by three to four shallow cultivations and planking. The assumption that alfalfa does not require any fertilizer is incorrect. A crop sown between October 15 and November 15 gives a good fodder return. In Baluchistan the latest sowing time is in March.

This crop needs a first irrigation three weeks after sowing. Subsequent irrigation are to be applied at interval of 15-20 days in winter and 10-15 days in summer, depending upon the weather. Alfalfa can tolerate drought better than other crops.

After the seasonal rains in summer are over, hoe the crop to keep it free of weeds and fertilize. This will ensure a good crop throughout the year.

Spring black stem, caused by the fungus Phoma medicaginis (Ascochyta imperfecta) is a common disease of lucerne which can cause reductions in yield and forage quality.

All parts of the plant may become infected. Early symptoms are small, dark-brown or black spots on the leaves, leaf petioles and stems. As the disease develops the lesions on the stems rapidly enlarge and join together until most of the stem is blackened. The infected areas on the stems may extend for several centimetres or may entirely girdle it. Severely infected stems and petioles wither and die. The leaves turn yellow and drop off if harvest is delayed.

Cut hay as early as possible to reduce losses through leaf drop. Seed from drier areas are less likely to be infected. There are no resistant cultivars nor chemicals.

Sclerotinia crown and stem rot, caused by the fungus Sclerotinia trifoliorum, occurs in most lucerne growing areas. The incidence and severity of this disease varies from year to year; there may be just scattered plants affected or when severe, whole paddocks. The greatest damage occurs when seedlings are affected.

The fungus infects the base of the stems and crown branches, near the soil line, causing death of these tissues and rapid wilting of the plant tops. A white cottony fungal mould develops on infected tissue during moist weather. Small, hard, black sclerotia form in the mould and inside the stems and crown.

Close grazing of clover in the autumn and early winter will slow the spread of the disease by reducing the humidity within the stand. Deep ploughing will bury sclerotia and reduce their chances of germinating. Use seed that is free of sclerotia. Use rotations of at least four to five years between susceptible crops. There are no resistant cultivars.

Charcoal rot, caused by the fungus Macrophomina phaseolina is unpredictable in occurrence and sporadic in appearance within the crop. When severe it can cause considerable thinning of stands due to plant deaths.

Dry, light brown lesions occur on the crown and roots which later become soft and spongy. After a period of hot dry weather the conducting tissues become covered with very small black resting bodies, sclerotia. By this time the tops of the plant will have wilted and died.

Armyworm, gram caterpillar and aphids, if the insect pest is observed attacking at least five percent of the crop near the flowering stage, Seven-85 should be dusted.

Weeds not only reduce the yield of lucerne, but also impairs the quality of hay and seed. Weed control should therefore receive attention before establishment. < The following measures should be applied

Time of harvesting and Yield:

The first cutting should be taken three months after sowing. Later cuts may be taken after an interval of five to six weeks. The best time of cutting the fodder is when 10-25% of the flowers have emerged. 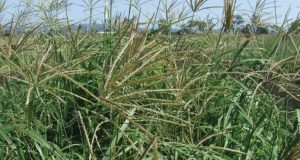 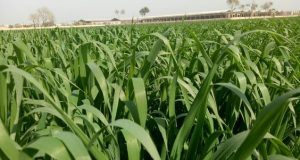 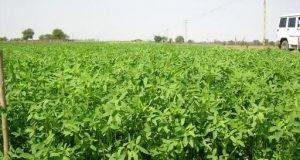 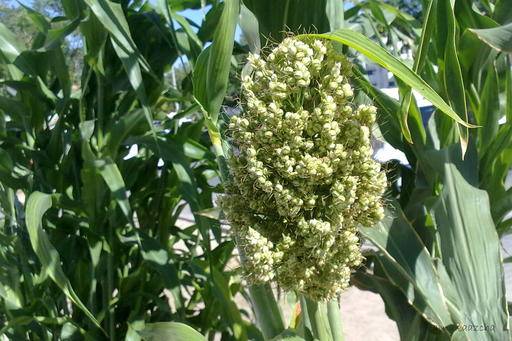 Sorghum Production Technology Climate and soil Basically, sorghum is a tropical plant, but it has ...