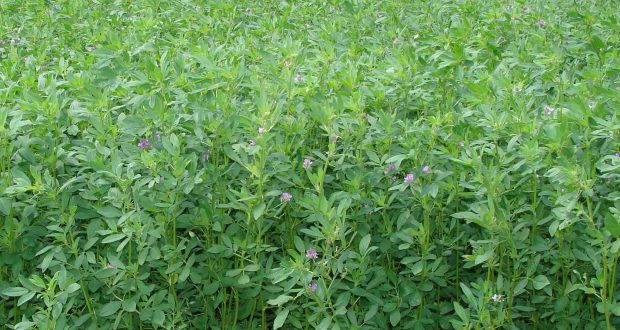 Lucerne is a multi-cut, perennial, legume forage crop. It is known as Alfalfa. Lucerne is well adapted to a wide range of climatic and soil conditions, but it does best under conditions of low rainfall and high sunshine. It grows well in a dry climate on deep, well drained, loamy soil with a PH of 6.5-7. It can tolerate extreme heat and cold. Drill method is considered better than broad casting. Because line sowing facilities hoeing and other cultural operations in subsequent years. It is also broadcasted in some parts of the country. It provides fodder throughout the year especially during the two periods of fodder scarcity in the country, May-June and October-November. A crop sown between October 15 and November 15 gives a good fodder return.

2018-10-05
bkk_admin
Previous: Resistant varieties should be selected for obtaining better production of wheat crop.
Next: Gram cultivation should be started on good soil moisture.