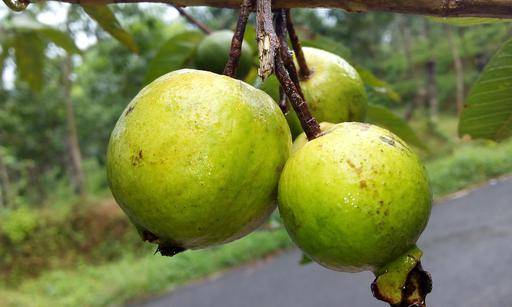 in Production Technology of Fruits December 11, 2017

Guava (Psidium guajava L. Famly Myrtaceae) has attained commercial importance in tropics and subtropics because of its wide adaptability to varied soil and climatic conditions and as profilic bearer. Guava is believed to be originated in tropical America (Mexico to Peru). At present, it is mainly produced in South Asian countries, the Hawaiian Island, Cuba, Brazil, Pakistan and India. In Pakistan, it is grown in all the provinces over an area of 58.5 thousand hectares with production of 468.3 thousand tones Table 1. The major guava growing areas include Shariqpur, Kasur, Lahore, Sheikhupora, Sangla Hills, Gujranwala in the Punjab; Kohat, Haripur and Bannu in the North West Frontier Province and Larkana and Hyderabad in Sindh.

Presently guavas are grown almost entirely for fresh consumption. However, international market for fresh guavas is small. Nevertheless, more trade is carried on processed guava products like Juices and nectars, Jam and Jellies, fruit paste, canned whole and halves in syrup. Some traders believe that there is a good international market potential for fresh guavas and that demand will grow as more consumers become acquainted with this fruit.

As already stated guava is successfully grown under tropical and subtropical climatic zones. In areas having distinct winter season, the yield tends to increase and quality improves. It can be grown from sea level to an altitude of about 1515 m. young plants are susceptible to drought and cold conditions. Dry atmosphere at the time of flowering and fruit setting is ideal whereas high temperature at fruit development causes fruit drop.

The guava does equally well on heavy clay, to light sandy, graval bars near streams, or on limestone and tolrates a pH range from 4.5 to 9.4. It is some what salt resistant. Good dranage is recommended however, guavas are seen growing on land with high water table.

Guava is propagated generally through seed however, cuttings, air layering, grafting and budding is also practiced. Although guava is hard to root, investigations indicate that it can be successfully propagated from cuttings under mist. Leafy shoot-tip cuttings of current season growth (10-12 cm long) treated with Indole butyric acid give more that 80% rooting after six weeks when planted in sand under mist in greenhouse during July-August.

Red fleshed: Of medium size with many fairly soft seeds, high in pectin and good for jelly.

Guava trees are planted at a distance of 5-6 meters. Trees grow rapidly and fruit in 2-4 years. They live 30-40 years but productivity declines after the 15th year. Orchard may be rejuvenated by drastic pruning. In guava, fruits are borne on current season’s growth. Manuring and fertilization encourages vegetative growth and fruiting. A balanced supply of NPK gives increased yield with quality fruit. NPK at the ratio of 2:1:1 in two equally split doses once in January and other in August is recommended according to plant age and soil conditions. Guava some time suffers from deficiency of zinc and iron. Spraying the trees with 7.0 gm per litter of ZnSo4 and 46.5 gm of FeSo4 improves yield and quality.

Light annual pruning is necessary to encourage new growth after every harvest. Guava flowers twice a year, first in March to April for summer crop and then in August to September for winter crop. Blooming period varies from 25-45 days. Winter crop is usually preferred as it yields higher with fruit of better quality. It is also possible to obtain blooming in a desired season. Some of the growers adopt the practice of having a good winter crop by withholding water during summer or deblossoming the summer crop. Research workers have suggested 2,4-D @ 30gm per litre of water as the most effective chemical for blossoming of summer flowers. Guava fruit takes about 125 days to reach maturity after setting.

Other than insects during rainy season, the fungus, Phytophthora parasitica is responsible for fruit rot. Wilt, associated with the fungi Fusarium solani and Macrophomina phaseoli, brings about gradual decline and death of under nourished, 1-5 years old guava trees. Wilt is also caused by Fusarium oxysporum andFusarium psidii which invades the trunk and roots.

At maturity fruit turns from green to oil green and at ripening creamy in colour. Hand picking of ripened fruits two to three times a week is suggested. The harvesting season many last 8-10 weeks. Fruit is highly perishable, therefore, it should be immediately marketed after harvest.