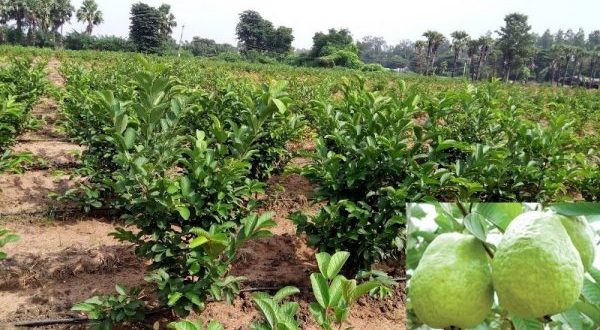 Experts have directed gardeners to irrigate guava orchards at an interval of 20 to 25 days. During the month of February and March, the irrigation should be done after 15 to 20 days. Agriculture experts said that guava is the fourth most important fruit of Pakistan, and third most important fruit of Punjab province, whose yield has exceeded more than 600,000 tones.

They said that cultivation of guava is being widely cultivated  in Faisalabad, Sahiwal, Kasur, Sheikhupura, Nankana Sahara, and Okara districts as well as in Sindh Larkana, Dadu, Shikarpur, Hyderabad districts and in Khyber Pakhtunkhwa districts of Hazara and Mardan are very suitable for cultivation of guava. High amount of vitamin C is present in guava, which is five times higher than other fruits and it is also an important source of phosphorus, calcium and iron.

Guava can be also used in making products such as Jam, Jelly, squashes, Juice and Candy. In most of the areas of Pakistan, guava is also cooked like curry.  Major varieties of guava are Larkana, Surahi, Shikarpuri, Gola, karela, Surkha and Selection 313. It produces fruit twice a year, first in the month of January and February and the second in the month of July and August.