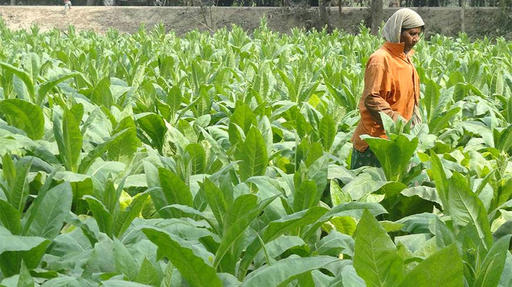 PESHAWAR: The tobacco growers have pledged to resist any attempt by the authorities to ban cultivation of the crop.

Any attempt to ban cultivation of tobacco will bear dangerous consequences as situation in many districts of the province will turn worse than that Waziristan Agency, a group of growers led by Afsar Khan told journalists here on Sunday. They said that PML-Q Senator Mushahid Hussain Syed had tabled ‘prohibition of smoking and protection of non-smokers bill’ in Senate that created unrest among the people of tobacco growing areas of Khyber Pakhtunkhwa.

They said that the bill was aimed at prohibiting all kinds of tobacco advertising, promotion and sponsorship of tobacco industry. They said that Swabi was the largest tobacco producing district of the province followed by Mardan, Charsadda, Buner and Mansehra. Say any such attempt by govt to have dangerous consequences The farmers said that tobacco was the lone cash crop and main source of livelihood of the people. They said that they were determined to resist any attempt of the government to ban cultivation of tobacco.

Afsar Khan said that tobacco growers had small agricultural land, which was not sufficient for other crops, particularly for vegetables. He said that owing to lack of demand in the market and lower prices of other agricultural produces, the growers suffered financial losses. He said that tobacco was cultivated on the demand of tobacco companies after fixation of the support price for each year. He said that government should not deprive them of the source of livelihood as they were dependent on tobacco crop. “It is like oxygen for our life,” he added.

Similarly, Growers Coordination Committee president Azam Khan said that the crop generated revenue of over Rs100 billion in the head of Federal Excise Duty (FED). He said that instead of its prohibition, the government should pay subsidy to tobacco growers. Liaquat Yousafzai, another grower, said that more than 1.5 million people were associated with the tobacco business directly and indirectly while the number of growers was 80,000. He said that a large number of people were using tobacco. He said that tobacco would be imported from other countries that would cost heavy foreign exchange if government placed ban on cultivation of the crop.

Mohammad Ayaz said on the occasion that although agriculture was a provincial subject, yet tobacco crop was under the control of centre. “It is sheer injustice with Khyber Pakhtunkhwa,” he added.