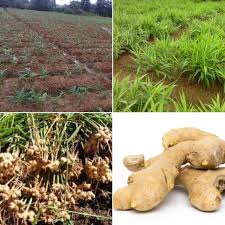 The ginger plant attains a maximum height of 1-1.5 ft. Its useable portion is the root that grows underground such as potato, ginger, sugar, and turmeric. They grow best in a loamy soil. Ginger can be successfully cultivated in a small guava orchard. Ginger can be grown in the plains areas from February to March and in the hilly areas by the end of May. 10 to 15 mounds rhizomes per acre are sufficient. Good production can be achieved in rainy seasons. If air humidity remains low during July-August due to low rainfall, the ginger crop does not produce good yields. With a better production technique, 80 to 100 mounds of ginger may be produced under favorable weather conditions.
Uzma Niazi (Agronomist)

2020-11-11
Hira Mahfooz
Previous: Guidelines for harvesting of Rice
Next: Instruction to complete the cultivation of gladiolus in the month of December.