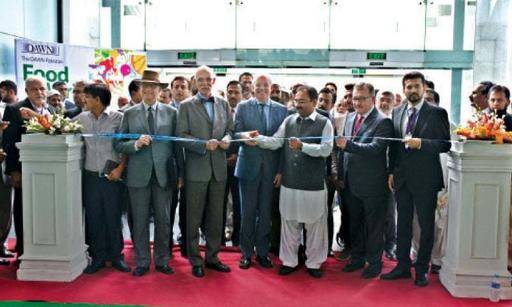 Food, agri expo kicks off with over 40 firms exhibiting

LAHORE: The two-day Dawn Pakistan Food and Agri Expo 2017 kicked off at the Expo Centre on Tuesday with over 40 local and international companies associated with agriculture and livestock sectors participating. The exhibition, titled ‘Greening The Value Chain: Agriculture Economy & Food Systems’, also covered two technical sessions: ‘Agriculture Production: Catalyst for National Growth & Food Security’ and ‘Importance of Value Addition for Agriculture Growth’. Speaking at the conference, Punjab Agriculture Minister Naeem Akhtar Bhabha said agriculture is the backbone of the country’s economy being a major employment generating sector. He said at present the major crops were contributing to the country’s gross domestic product, but their share was much less.

He said interest-free loans for Punjab-based farmers, establishment of centres for latest agriculture implements, sampling of soil and water of each farmer, modern irrigation system, subsidised fertilizers and laser land levellers, launch of soil-less agriculture, and free delivery of olive plants in Potohar region were part of the latest reforms of the provincial government. Acting Australian High Commissioner to Pakistan Jurek Juszczyk said Australia was Pakistan’s long-term partner in agriculture since 1980s and wanted agricultural progress in Pakistan.

United States Agency for International Development Mission Director John Groarke said the US and Pakistan had a long history of collaboration in agriculture sector as in the 1950s scientists from both sides helped introduce high yielding grains in Pakistan. He said that for seven years the US had partnered with the Pakistan government and private sector to invest $770 million to fund projects that supported economic growth and agriculture through latest technology. European Union Ambassador to Pakistan Jean-Francois Cautain said climate change across the globe had appeared to be a major challenge for future generations in terms of food security and food value chain. He said Pakistani market was the seventh most vulnerable in terms of climate change and also among those countries where heat stress was common.

Cautain said the EU saw better cooperation with Pakistan in economic and agriculture fields as it was already working on different fronts for economic sustainability of the country. Earlier, Dawn Media Group Operations Director Kashif Saeed delivered a welcome note, saying the group had been organising this exhibition since 2012 in the perspective of global phenomenon of food insecurity and subsequent challenges to agriculture in Pakistan. Later, the two-day exhibition was inaugurated and the dignitaries visited the stalls. A good number of farmers and representatives of agriculture and livestock sectors visited the exhibition and got information about latest agriculture implements and other services. Some companies from Turkey, Malaysia, Australia and the US besides USAID had also set up their stalls.