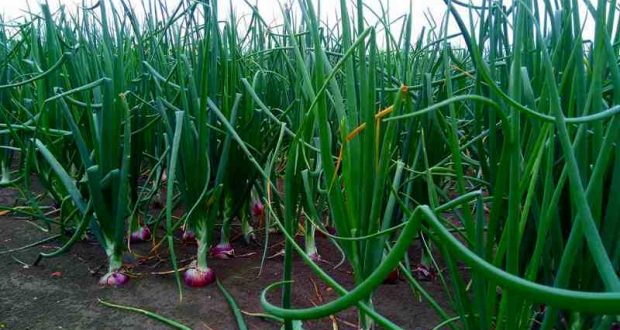 Onions generally require cool weather to produce their tops and warm weather to produce their bulbs. They’re frost-hardy. Onion is cultivated in cold weather, and later it requires longer and hot days for proper growth and development. In Punjab, two crops of onion are cultivated, spring and autumn crop. Spring crop, nursery is raised in October and plants are transfer to the field in December. Production of spring crop is obtained during April-May. Autumn crop, nursey is raised at the end of July and the plants are transferred to the field during the first week of September and the crop is harvested in January. For proper production of onions, fertile loamy soil with good drainage is suitable. Onions grows well on any well-drained, fertile and non-crusting soil. Sandy loams to clay loam soils are preferred. Sandy soils require more and frequent irrigation and favours early maturity. Heavy soils produce uneven bulbs. Land should be properly prepared for onion cultivation to obtain higher production.