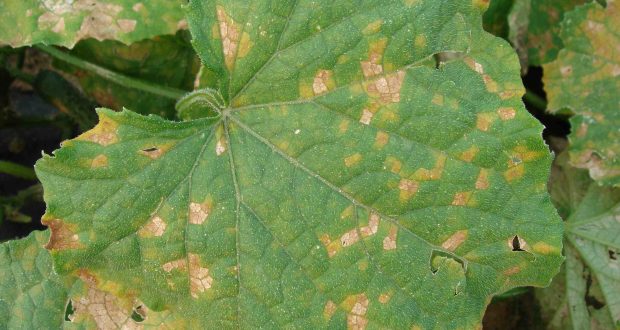 Farmers are instructed to protect vegetables from downy mildew.

The cultivation of cucumber, bitter gourd, bottle gourd, melon and water melon in tunnel has been done. Due to the chance of spread of diseases such as powdery mildew, downy mildew, damping off, rotting and viral diseases, Experts have directed farmers to take appropriate measures timely so that the yield losses can be minimized.  Assistant Plant Pathologist, Mian Mohammad Nasir said that damping off is more prone to young seedlings. In this disease the young seedlings starts wilting and while in larger plants the lower end of stem starts rotting.

For the prevention of the disease, before the cultivation seed must be treated with proper fungicide such as thiophanate-methyl or carbendazim. In cucurbitaceae family, due to the occurrence of downy mildew, yellow patches are formed on leaves. These spots even extend to the stem. Downy mildew is especially damaging in warm, humid climates where the pathogen thrives. In severe case plants start wilting.

If temperature ranges between 8 to 26◦C and the moisture in the air goes beyond 70%, then the chance of the spread of the disease increases. To prevent the disease, the disease-affected plants must be removed and buried in the soil. For the control of the disease chemicals such as mancozeb or copper hydroxide at the rate of 2-2.5 gram per litre water must be sprayed.