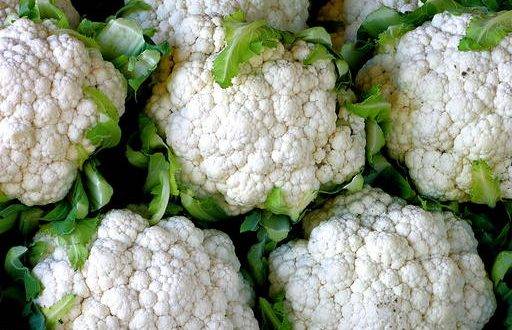 in Production Technology of Vegetables June 18, 2016

CAULIFLOWER originated from Europe, spread to other countries and at present is cultivated in many parts of the world.. In Pakistan, it was grown on 1,697 hectares and its production in 2004-05 was 17,277 tones. This crop is developed from broccoli, and is considered as one of the refined and delicate vegetables and is cultivated for its white and tender head or curd.

The curds are short and thick parts of the flower buds. Cauliflower when utilised green is a good source of protein and vitamin B, as compared to other leafy vegetables. Cauliflower is free of fat and cholesterol and very low in sodium and calories and rich in vitamin C, potassium and fibre. It is an excellent vegetable for diabetics.

Cauliflower is beneficial for human health as it reduces risk of cancer, particularly of the colon, rectum and stomach. It also serves as a good source of vitamin B5, B6, manganese and omega-3 fatty acids. This profile includes full of nutrients, including carbohydrates, sugar, soluble and insoluble fiber, sodium, vitamins, minerals, fatty acids, amino acids etc. Cauliflower is a delicious vegetable and is usually eaten as baked, soups or salad.

Cauliflower is grown under the same conditions required for cabbage. The only difference is that cauliflowers should be transferred to another place after flowers appear. Its central part should be left and sides of the flowers should be removed to allow growth. When flowers start maturing, pods are picked and kept over high and dry place under sun heat. The seeds are removed, separated and filled in cloth bags after drying.

Cauliflower grows best in cool, moist climate and is sensitive to low temperatures. Suitable temperature for healthy growth of cauliflower is between 17 an 18 degrees Centigrade. Temperature above 20 °C during maturity badly affects its growth. The local variety developed for early planting can withstand heat. But the variety ‘China ka Moti’ can withstand high temperature. Therefore, it is important that right variety should be selected for the right season and proper sowing.

Cauliflower requires loams to clay loam with fertile and moist soil with good drainage of water. The land should be ploughed properly followed by harrowing for breaking clods and properly levelled. One month before sowing of the vegetable, farm yard manure (FYM) should be applied and completely mixed with soil. Ridges should be made at a distance of 75 cm with the help of spade and watered properly. The vegetable should be sown at a distance of 30 cm on ridges in the evening.

There are two varieties of cauliflower in Sindh. The first variety is developed for early planting, while the second called China ka moti is commonly grown in normal season. For early season seed recommendation is about one kg per acre and for late season 0.5 kg per acre.

Cauliflower requires a large quantity of fertilizer. One month before sowing, FYM should be mixed in soil. During sowing period two bags of DAP, one bag of potash and two bags of ammonium sulphate should applied per acre.

Cauliflower is sensitive to stress, and should be properly irrigated. For early sowing the field should be irrigated three times at an interval of four days and watering should be done whenever necessary. For late sowing irrigation is needed twice at an interval of one week. However, if needed water should be given according to need.

Weed should be removed from the field completely in the initial stage of sowing to save the crop from any harm. Growth of weed should be checked every week. Diamond back moth, caterpillar and mahlo, the predominant insects and pests of cauliflower, should be destroyed before they cause any harm to the crop. White fungus and Downy mildew fungus are the two predominant diseases of cauliflower and they should be destroyed with the help of pesticide.