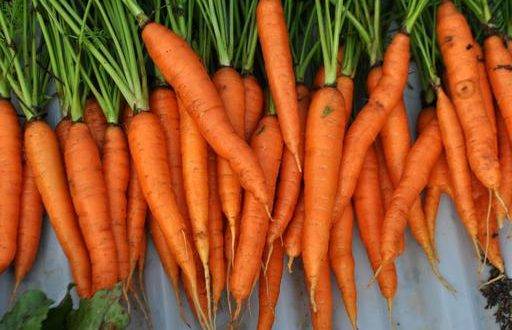 in Production Technology of Vegetables August 3, 2016

Carrot (Doucus carota) is a very poplar vegetable in Pakistan. It is rich in carotene, a precursor of Vitamin A, and contains appreciable quantities of thiamine and riboflavin. It belongs to the Umbelliferae family and is probably a native of Europe and British Isles.

There has been a progressive increase in area and production of carrots in Pakistan. In 1998-99, the area increased to 10.94 thousand ha and production 194.92 thousand tonnes. The data since 1993-94 are as follows:

The average shares of the provinces in the over all area and production of carrots, based on the data of 1998-99 crop are given in the following table.

Carrot is a biennial vegetable, grown for its edible, fleshy taproots. Its root which is cut crosswise shows two distinct areas – an outer area and an inner area or core. High quality carrot is that which has a large outer area compared to the inner one. The outer area contains more sugar and vitamins than the inner one.
Carrot produces a thickened root and a whorl of leaves during its first year of growth. At the beginning of second year, the flower stalk starts from the crown and grows up to a height of 60 to 90 cm. Swollen taproot can reach a length of 20 to 25 cm but its shape, colour and size depend upon the cultivar grown. Roots may be yellow, red dark, blue and seeds are small and prominently ribbed.

Carrot is a cool season vegetable and is moderately frost-tolerant. The best colour carrots are produced when temperatures at the growth stage range between 15°C and 20°C Above or below this level, carrot colour develops slowly and tends to be rather yellow. Typical root shape is also produced at similar temperatures, the ideal being 18°C. Carrot is prone to bolting in its first year when subjected to low temperatures (frost levels) Bolted carrot is tough, small and unmarketable.

Carrot thrives best on deep, loose loamy soil. To secure an early crop, sandy loam soil is ideal one. A soil in the pH range of 5.5. to 6.5 is the best. Long smooth slender carrot, desired for fresh market, can be successfully grown only on deep, friable, well-drained light soils, free of debris and rocks. Otherwise the roots will be of poor shape.

Since carrot seed is rather small, a finely pulverized seedbed is important so that maximum number of soil particles may contact the seed to facilitate germination process. Thorough cultivation to a depth of 25 to 30 cm is essential. The ploughed land must be disked well and planking should follow the disking. Roots will be forked, if grown in poorly prepared soil. Land should be thoroughly levelled for the efficient and economical use of irrigation water.

Due to varying climatic conditions there is a wide range of sowing time in Pakistan. Four main seasons are as under:

It is planted during August and harvested during November/December.

It is planted during September/October and is ready of harvest during December/January.

It is planted during November and is harvested in February/March.

The crop is raised in the hilly areas. It is sown in March/April and is harvested form June to July.

A seed rate of 20 to 25 kg per hectare is usually practised. Carrot is seeded about 1/2 to 3/4 inch deep in the soil for better germination. The optimum distance between row-to-row should be 60 cm and plant-to-plant as 3 to 4 cm. Seed should be sown on both sides of ridges.
The seedbed must be kept moist during the germination period. The soils which crust badly are likely to prevent a good stand of carrot.

There must be enough moisture in the soil at the time of seed sowing to facilitate better germination. The first irrigation may be needed five to six days after sowing and repeated again after five to six days till the completion of germination. Water should be applied gradually and moderately. To prevent curst formation, ridges should not be submerged in water. Thereafter, the crop should be irrigated after an interval of 15 to 20 days, depending on the weather conditions.

Thinning is important to achieve good-sized roots. When the plants attain a size of about 5 to 7 cm, thinning should be carried out so that plants are 5 cm apart on rows. It can be done in two or three stages rather than all at once. Unless thinning is done at this time, the carrot will not develop well or symmetrically. Twisted, distorted roots are often caused by delaying thinning too long.

Unfinished compost or manure used as a fertilizer for carrot induces rough and branched roots. These materials should be well composted before being added to soil where the crop is grown. A well rotten farm yard manure should be applied at the rate of 25 to 30 tonnes per hectare, at the time of land preparation for maintaining proper physical conditions and fertility status of the soil.
General recommendation for chemical fertilizers is 52 kg N, 45 kg of P2O5 and 62 kg of K2O and half quantity of N should be applied before seed sowing. Remaining half of N should be applied four to six weeks after sowing with subsequent irrigation.

Hoeing is very important, especially in the early stages of growth to keep the weeds under control Since carrot grows very slowly for the first few weeks, therefore it cannot compete successfully with weeds. Earthing up of the crop should be done for proper development of roots and eradication of weeds.

Carrots for fresh market are harvested when the roots are 2.5 to 3 cm in diameter at the upper end. The field should be slightly irrigated a few days before harvesting. All the tops should be removed since they wilt and begin to decay first.

Cold storage prolongs the life of carrot by slowing physiological changes. Topping and bagging the carrot in transparent film reduces the loss of weight and water during transportation to the market. Carrots can be kept in good condition for six months at a temperature of about 32°F with 90 to 98 percent relative humidity. However, it deteriorates in quality in storage owing to slow loss of sugar in respiration.