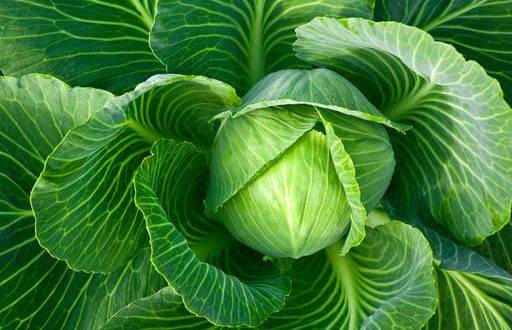 in Production Technology of Vegetables August 4, 2016

Cabbage (Brassica oleracea or variants) is a leafy green or purple biennial plant, grown as an annual vegetable crop for its dense-leaved heads. Closely related to other cole crops, such as broccoli, cauliflower, and brussels sprouts, it descends from B. oleraceavar. oleracea, a wild field cabbage. Cabbage heads generally range from 0.5 to 4 kilograms (1 to 9 lb), and can be green, purple and white. Smooth-leafed firm-headed green cabbages are the most common, with smooth-leafed red and crinkle-leafed savoy cabbages of both colors seen more rarely. It is a multi-layered vegetable. Under conditions of long sunlit days such as are found at high northern latitudes in summer, cabbages can grow much larger. Some records are discussed at the end of the history section.

It is difficult to trace the exact history of cabbage, but it was most likely domesticated somewhere in Europe before 1000 BC, although savoys were not developed until the 16th century. By the middle Ages, it had become a prominent part of European cuisine. Cabbage heads are generally picked during the first year of the plant’s life cycle, but plants intended for seed are allowed to grow a second year, and must be kept separated from other cole crops to prevent cross-pollination. Cabbage is prone to several nutrient deficiencies, as well as multiple pests, bacterial and fungal diseases.

Cabbage is a cool season vegetable. The optimum temperature for growth and heading is between 15°C and 20oC. Above 25oC, the growth is arrested. Cabbage thrives best on soils that retain moisture. A soil in the pH range of 6.0 to 6.5 is the best. A seed rate of 200-500 g is enough for raising seedlings for one hectare. For production of seedlings, seed is sown in seed beds 4-6 weeks before transplanting in the field. The cultivars may be spaced at 30-40 cm between the plants and 50-60 cm between the rows.

Well rotten farm yard manure @ 25-30 tonnes/ha should be thoroughly spread and ploughed under during land preparation. General recommendation for chemical fertilizers is 100 kg N, 75 kg P2 O5 and 50 kg of K2O per hectare. For better results, full quantity of P2O5 and K2O and half quantity of N should be applied before transplanting. Remaining half of N should be applied four to six weeks after transplanting with subsequent irrigation.

Seedlings should be watered immediately after transplanting and thereafter irrigation should be applied at fortnightly interval. Watering should be avoided at the time of head maturity since this causes splitting of heads.

The cabbage crop during its growth period is attacked by a large number of insect pests every year including whitefly (Bemisia tabaci), armyworm (Spodoptera sp.), cabbage looper (Trichoplusia binotalis) and cabbage butterfly (Pieris brassicae) (Shuaib et al., 2007). Amongst them diamond back moth (DBM) (Plutella xylostella L.) is the most serious pest of cabbage. It is a very destructive pest in southern Sindh (Hyderabad & Karachi regions) of Pakistan where cruciferous vegetables are grown throughout the year.

The crop should be kept free of weeds by hoeing. Three to four hoeing are required to keep the weeds under control.

Harvesting should be done when the heads are firm. The mature heads should be cut with a knife along with some wrapper leaves. The yield of cabbage depending upon varieties varies between 20-50 tonnes per hectare.