Agricultural News
Home » Agriculture News » As the urban corn cob vendors disappear gradually from the streets, farmers in Sindh get doubtful of getting returns on the grain, and prefer growing it only as fodder grass. The promise of higher returns is what prompts their decision. 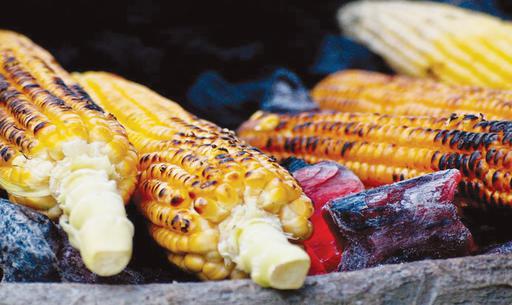 As the urban corn cob vendors disappear gradually from the streets, farmers in Sindh get doubtful of getting returns on the grain, and prefer growing it only as fodder grass. The promise of higher returns is what prompts their decision.

Majority of the growers in Sindh have planned to produce the maize crop for fodder. Their justification is that they receive higher returns on grass, compared to the grain, the demand for which has fallen considerably.

Maize has been the most common and oldest grains consumed widely in rural areas. That is why traditional people believe who were growing a particular variety of the grain using indigenous seeds feel deprived. They fear losing the variety due to the low demand of corn in both rural and urban areas.

The grain also seems to be lower on the government’s priority list, hence driving the small farmers further into a corner. Hardly a few growers, who still cultivate the indigenous seed are sticking to their previous plan and planting corn on their small landholdings.

Reports collected from various areas in Sindh show that maize fodder grass is being exported to other countries too. The produce passes through a proper processing mechanism before it is exported.

Since maize is used extensively as the main source of calories in animal feed and feed formulation, the grass market motivates the growers at all levels.

Climate change is one other reason farmers are reluctant to plant the grain, as frequent disasters in the corn-belt in Sindh have damaged soil fertility. Apart from profits on produce, this has also threatened food security of the rural populace.

“They give seeds to growers and in return get grains from them for manufacturing purposes. This has boosted the farmers’ morale to grow maize and earn more in those provinces,” he said.

Comparing Punjab with Sindh, he said the southern province offers little opportunity to the maize growers. “There are a small number of industries in Kotri, and some may be in other parts of the province, which may offer incentives to maize producers. But this industry is still niche, and has to yet attract a large portion of growers to shift hand towards producing grains instead of depending on grasses,” he added.

If that happens, Nangraj thinks the growers in Sindh may boost their maize production.

Talking about the technical aspect and changing mindset of growers towards maize cultivation, he said presently new maize seed varieties were profitable to produce grass fodder and sell it in Karachi and other markets to fulfil the requirement of the dairy farms.

The growers use maize crop as grass for at least two-three times and earn more as compared to producing grains. “That might be one reason for growers to change their priority,” he said.

In Pakistan, maize is said to be the fourth largest grown crop after wheat, cotton and rice. The area under maize is reportedly over one million hectare and production stands at 3.5 million metric tonnes.

According to government reports, Sindh contributes only three perfect in total maize production along with Balochistan. But the growers believe another survey is required to determine the current situation, as it has worsened further and only a small portion of land is being cultivated for the maize crop.

Nawab Zubair Ahmed Talpur, President, Sindh Growers Alliance, said the main cause of decline in this valuable grain crop is the lack of support for producers from the provincial government.

He too gave the example of Punjab and Khyber Pakhtunkhwa where not only the government, but the manufacturing companies too were offering incentives to the corn growers. The support prompts them to grow maize as they know their produce has a market and will give them the necessary returns. It is inspiring them to stick to growing the corn.

On the other hand, he said, “The Sindh government is yet to adapt a grower-friendly approach to fulfil the food needs of people here.”

He pointed out that hybrid seeds of all crops and fertilisers with fake brand labels were available in the local markets. “Since growers have no options but to use the dirty seeds and fertiliser, they often lose their entire crop.”

These problems multiply due to insufficient water share, Talpur said. “Despite continuous protest demonstrations by the growers for getting their rightful share of irrigation water, and for getting their other problems resolved, the provincial government has paid no heed to them,” he said, adding that the situation continues to worsen for the rural communities in the corn-belt.

“On many occasions, dealers have deprived even major growers of pure seed and fertiliser,” Talpur said.

He explained how the farmers used to plan their crops and rotation, dedicating a certain area to cultivate corn. “We have traditional landholdings, and always preferred to reserve a piece of land for producing maize. But due to the problems, many big and small landlords do not cultivate maize any more. Some prefer buying hybrid maize to cultivate the crop as fodder grasses.”

Aligul Chandio, a vendor, selling soaked maize cob in the streets, looked uneasy while selling the cron cobs due to the lower quality of the grains. “The younger clients demand to have finer quality,” he said.

He justifies the poor quality by saying it is the first arrival of the season and hence not as fine as it is when the season is at its peak.

According to him, they buy maize from Hyderabad fruit and vegetable market at Rs700 per bag of 40 kilograms. The rate per bag ranges between Rs700 and Rs1400. He said

the maize from Sindh was of lower quality compared to the produce from Punjab.

He sells one soaked cob at Rs10-Rs20, depending on the quality.

Street vendors have a major role in seasons to offer roasted and boiled maize to their customers in rural and urban areas. But now they are facing problems because of the poor quality available in the markets, which has resulted in lower demand for the product.

Prof Ismail Kumbhar of Sindh Agriculture University Tandojam said it was up to the government to promote these grain crops to address the food needs of the country. “Unchecked population growth may create food insecurity in future,” he said.

He suggested promoting awareness programmes for people to change their diet patterns gradually, as majority of the people still prioritised to consume fast food.

“It is healthier to channelize the public demand towards corn flour products and corn cob, as happens in other countries,” he said.

He blamed corporate farming too for destroying the crop patterns, as many farming companies were growing maize as fodder on large swathes of fertile land. “They are exporting fodder grasses through the processing mechanism and earning a lot more. This approach affects traditional crop cultivation and pushes the country towards food insecurity,” he said.

The needs is for the government to pay attention to the problems of the farmers and devise a mechanism to address their issues, including a fair share in irrigation water, support programmes and awareness campaigns providing access to quality seeds and fertilizer’s.