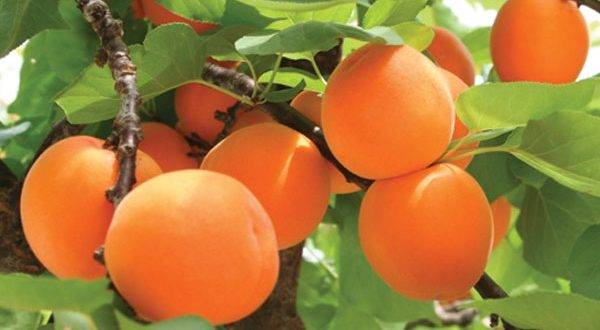 in Production Technology of Fruits January 19, 2018

Major diseases and insects and their control

Brown rot is a major disease that can infect the blossoms, fruit, spurs (flower and fruit bearing twigs), and small branches. Rain during the pre-bloom and bloom period can lead to flower infection and crop loss. Warm and humid weather conditions can lead to fruit infections causing entire crop loss on the tree or in storage. Disease prevention is essential, especially just before ripening, during, and after harvest of fruit. Typical disease symptoms are blossom and twig blight, cankers, and fruit rot.

Blossom infections reduce fruit set and cause fruit infections later in the season. Infected flowers turn brown, wither, and die. In some instances, they may become fixed to twigs as a gummy mass, in others, they may drop. Susceptibility to blossom blight is variable among the stone fruit with apricot being the most susceptible, followed by prune, sweet cherry, peach, sour cherry, and plum, respectively. Controlling blossom infections is essential to managing the development of the disease in the orchard.

Brown rot infections on fruit first appear as soft brown spots which rapidly expand and are covered with powdery masses of tan colored spores. Infected fruits rot very rapidly, and shrink into a wrinkled “mummy” as it dries on the tree. Both immature and mature fruit infected with brown rot tend to remain on the tree.

Botrytis blight or gray mold is a fungus disease which can cause blight. Botrytis infections are favored by cool, rainy spring and summer weather usually around 15 ºC. Gray mold can be particularly damaging when rainy, drizzly weather continues over several days. Botrytis blight can affect leaves, stems, flowers, fruit, and any other part of a plant with the exception of the roots. Treat as for Brown rot.

Bacterial Canker is a disease that causes cankers (irregularly shaped, brown, watersoaked areas) that develop in the bark and outer sapwood of spurs, branches, and the tree trunk. Small cankers can develop on twigs at the base of infected buds. In the spring, amber-colored gum may ooze from the margins of cankers. In cold, wet weather, blossoms may turn brown, shrivel, and cling to the tree. Leaves also may develop dark spots that later drop out. Sunken spots may develop on young fruit.

Avoid planting on shallow soils. Delay pruning until late winter. Cauterize pruned branches with a hand-held propane burner where disease is known to exist. If trees have been infected, remove entire affected branches in the summer, being sure to eliminate the entire canker and a few inches below. Choice of rootstock and varieties can influence susceptibility to bacterial canker and blast. Fall or spring foliar applications of complete micronutrients (especially zinc and boron) may help prevent bacterial canker, as nutrient deficiencies make all stone fruits more susceptible. Trees stressed by nematodes are more likely to be severely damaged.

Infected trees or plants often wilt and die rapidly with the first warm weather of the season. Leaves may turn dull green, yellow, or in some cases red or purplish. Symptoms may develop first on one branch or stem then spread to the rest of the tree or plant. Darkened areas develop in the bark around the crown and upper roots. Gum or dark sap may ooze from the margins of the diseased trunk area. Reddish brown streaks or zones can be seen in the inner bark and outer layer of wood.

The key factor in reducing the threat of root and crown rot is good water management. Good soil drainage is best provided before planting. Never cover the graft union with soil and do not water the crown area directly. If you suspect crown rot,carefully cut away affected bark at the soil line. Trees can sometimes be saved by removing soil from the base of the tree down to the tops of the main roots and allowing the crown tissue to dry out.

Rhizopus Rot is caused by Rhizopus stolonifer– occurs frequently in ripe or near-ripe apricot fruits held at 20 to 25°C.

Cooling the fruit and keeping them below 5°C is v ery effective against this fungus.

Eutypa dieback of apricot appears more frequently in mature orchards. The first symptom is usually the rapid collapse of a branch during mid-summer. Leaves suddenly wilt and die, remaining attached to the branch. Examination of the base of the dead branch will reveal a canker surrounding a pruning wound. Most cankers produce large amounts of gum.The fungus spreads toward the trunk, eventually killing the tree. Eutypa has not been officially reported for apricot, however, it may appear on apricot as well as other stone fruit species and grapes.

Prune late in the dormant season to promote rapid healing of wounds.Remove and burn infected wood inside the orchard and dead wood in adjacent orchards to reduce the spread of the pathogen. Cut out and remove dead limbs and trees from the orchard during dormancy. Completely remove all cankers, pruning below the canker on the limbe or trunks until no darkened canker tissue remains. Make large cuts directly after a rain because the risk for infection is lowest at this time as the atmospheric spore load has been washed out temporarily.

Small numbers of aphids are not a concern. However, large populations cause curling, yellowing, and distortion of leaves and stunting of shoots; they can also produce large quantities of a sticky exudate known as honeydew, which often turns black with the growth of a sooty mold fungus that can damage fruit.

Catch infestations early. Once aphid numbers are high and they have begun to distort and curl leaves, it is often hard to control them because the curled leaves shelter aphids from insecticides or natural enemies. Where aphid populations are localized on a few curled leaves or new shoots, the best control may be to prune these areas out and dispose of them. In large trees, some aphids thrive in the dense inner canopy; pruning these areas out can make the habitat less suitable. Keep the area free from weeds that can harbor aphids. High levels of nitrogen fertilizer favor aphid reproduction. Never use more nitrogen than necessary. Insecticidal soap, neem oil, and narrow-range oil (e.g., supreme or superior parafinic-type oil) provide temporary control if applied to thoroughly cover infested foliage. To get thorough coverage, spray these materials with a high volume of water and target the underside of leaves as well as the top. Soaps, neem oil, and narrow range oil only kill aphids present on the day they are sprayed, so applications may need to be repeated.

Larvae bore into the growing shoots of twigs and ripening fruit or nuts. Shoots and leaves wilt and die back one to several inches from the growing tips of twigs. In fleshy fruit, injury is usually superficial. Tolerate low levels of damage.

The most reliable control for peach twig borer is a dormant spray of spinosad or spinosad and oil, applied in winter to kill overwintering caterpillars on the tree branches. Spinosad or Bacillus thuringiensis, applied just as trees bloom and again a week later, also controls the pest. Avoid spraying during the growing season because it is difficult to time pesticide applications effectively. Sprays must be applied to control hatching larvae before they enter twigs or fruit.

Peachtree borer and damage near the soil line from the borer. The adult peachtree borer is a steel blue to black clearwinged moth. Larvae are light brown or pinkish with a darker head. Damage is found primarily in the crown area or lower part of the trunk above or just below the soil line. These pests can girdle and kill a healthy young tree. Older trees are sometimes attacked but they usually tolerate the damage unless there are many larvae or a tree is attacked several years in a row. Management: Keep trees healthy and vigorous. You can remove borers through a technique called worming during fall, winter, or early spring. Treatment of trunks with insecticides or parasitic nematodes can be effective.

When plants are heavily infested with scales, leaves may look wilted, turn yellow, and drop prematurely. Scales sometimes curl leaves or cause deformed blemishes or discolored halos in fruit, leaves, or twigs. Bark infested with armored scales may crack and exude gum. When numerous, some scale species weaken plants and cause them to grow slowly. Branches or other plant parts may die if they remain heavily infested with scales. If plant parts die quickly, dead brownish leaves may remain on branches, giving them a scorched appearance. Several years of severe infestations may kill young plants.

If scales become too numerous, a well-timed and thorough spray using horticultural (narrow-range) oil applied either during the dormant season or soon after scale crawlers are active in late winter to early summer should provide good control. Complete spray coverage of infested plants (such as the underside of leaves) is needed to obtain good control. Thorough spray coverage is especially critical when treating armored scales and oak pit scales, as these scales are generally less susceptible to pesticides than soft scales. Harvest and postharvest handling

Apricots for fresh consumption are picked firm-mature; firmness is a reliable indicator, as is color development.

Apricots for fresh consumption or processing are picked by hand and carefully handled. Trees are usually picked over 2-3 times each, when fruit are firm.

Dried apricots can be harvested later (fully ripe) than those for fresh market, and exposed to SO2 (sulfur dioxide) to avoid post-harvest diseases. Sun-drying is the common method of drying apricots in Afghanistan. Canned apricots are immersed in sugar syrup. Fruit can also be made into jam or chutney.

Apricots when fresh have an extremely short shelf-life of only 1- 2 weeks at 0° C and 90% relative humidity. They are susceptible to all post-harvest diseases (e.g., Rhizopus fruit rot). Fruit can be canned either as whole, unpitted, whole and pitted, cut fruit or juice. jelly, jam, cream, marmalade, green apricot pickles and dried fruit pulp, apricot cake.