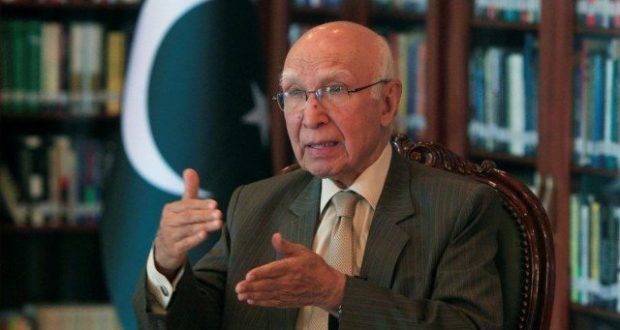 ISLAMABAD :Deputy Chairman Planning Commission Sartaj Aziz Wednesday said keeping in view the importance of agriculture in the national economy, food security and alleviation of poverty, the sector had been included as anarea of cooperation in the Long-Term Plan of China Pakistan Economic Corridor to ensure sustainable economic growth in the country.

He was presiding over a meeting with a Chinese delegation led by Dend Ben Tai, Vice Chairman of Standing Committee on Agriculture and Animal Husbandry. Sartaj Aziz said it was good time to enhance the level of cooperation in various sectors, including agriculture, which had great potential, under the on-going CPEC projects.

Previously, he said, the agriculture sector was over 50% contributor of Pakistan’s GDP and now it wasaround 20% with average growth rate of over 4 % in last 40 years. Irrigation system and green revolution played an effective role in maintaining high growth rate and it helped Pakistan in self-sufficiency of food, he added.